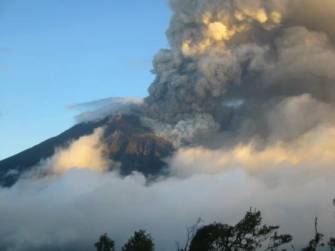 Not really a “new eruption” as such, but the Geophysics Institute of Ecuador is reporting that Tungurahua, one of the most active volcanoes in South America, has been erupting ash and bombs as of late, along with showing signs of increased seismicity. Nothing new for this tongue-twister of a volcano as it has been erupting since 1999.