UCEA is the University Council for Educational Administration, a consortium of the educational leadership preparation programs from many of the largest research universities across the world. University of Wisconsin-Madison, University of Texas-Austin, Washington State University, Fordham University…  those kinds of places. Iowa State, my institution, is a UCEA member, which is why I was able to take CASTLE (which is a UCEA center) with me when I left the University of Minnesota. The yearly UCEA convention is a must-attend for most educational leadership faculty from large universities. Faculty from smaller institutions attend too, as do a fairly decent number of graduate students (mostly those who are graduating and looking for faculty jobs!).

I think two things make a conference great: what happens inside the conference (sessions, networking, conversations in hallway and lobby) and what happens outside the conference (restaurants, shopping, and other attractions within walking distance). What happens inside UCEA is usually fabulous. Interesting sessions (if you’re interested in educational leadership research) and great conversations almost always occur for everyone. I’m baffled, however, by our hotel choices some years. For example, Albuquerque is a great city but there was nothing near our hotel except for a convenience store. This meant that everyone had to eat breakfast and lunch in the tiny hotel restaurant. Standing in a line of hundreds of people for 60-90 minutes just to get a cheeseburger doesn’t leave good feelings about the conference. The same thing happened in Kansas City. There are great places to eat and shop there, but we were miles from them. Judging by our surroundings here in Alexandria, I’m afraid the same thing is going to happen this week. Other than the hotel restaurant, the closest places to eat are an Arby’s and a McDonald’s, both of which are a 10-minute walk away. Ugh. 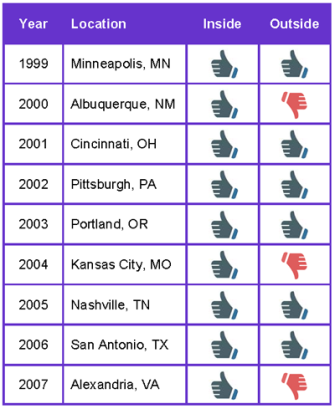 A few weeks ago Ihighlighted some videos made by Michael Wesch and his students at KansasState University. If you haven’t seen them, I encourage you to do so.DavidWarlick likedA Vision […]