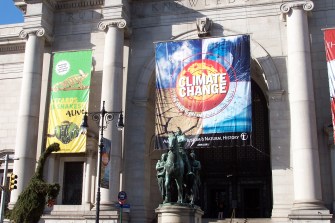 On Thursday, Feb. 5, I will be at Virginia Commonwealth University giving a talk as part of the university’s Science, Technology, and Society lecture series (details). It will be an updated and more polished version of the lecture I gave at the New York Academy of Sciences in December.

Then on Tues., Feb. 10 I will be in New York at the American Museum of Natural History participating in a stellar panel discussion on how the media covers climate change featuring Andrew Revkin of the NY Times, Bud Ward of the Yale Forum on Climate Change and the Media, Bill Blakemore of ABC News, and Diane Hawkins-Cox of CNN.

From an email sent out this morning by NSF. If readers can make it, this panel is definitely worth attending.NSF to Host Panel Discussion on Communicating Climate ChangeJournalists Andy Revkin […]