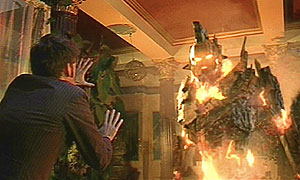 The Doctor fights off a magma creature in Pompeii.

Now, most of the time I talk about why I started this blog, I talk about the eruption of Chaiten in Chile as the catalyst. However, if you look back at my archives, you’ll see that one of my first posts was on the Doctor Who episode “The Fires of Pompeii” – so that might also be a good marker to point to on why I started this blog. Why do I bring this up? Well, Pompeii gets mentioned a couple times in the first few seasons of the revived Doctor Who. First off, when the Doctor meets Capt. Jack Harkness (a time-traveling huckster), Capt. Jack mentions that one of this favorite scams is to sell some alien a faked object and asks them to meet in Pompeii on the morning of the day that Vesuvius erupted in 79 A.D. – “volcano day” as he calls it. That way, the fake is buried in the eruption before the scammed buyer can figure it out, and Capt. Jack is long gone. However, later in the episode, one of Capt. Jack’s scams (this one set in WWII London) backfires badly and the Doctor says something to the effect of “we’re in Pompeii, and today is volcano day!”

Well, sure enough, today is “Volcano Day”! The eruption of Vesuvius that buried Pompeii – and lead Pliny to write his Letters that birthed volcanology occurred (at least we think) on August 24, 79 A.D. So, eat some olives in memory of those who perished over 1,900 years ago – and hope that Naples is prepared the next time Vesuvius rumbles so that we don’t repeat “Volcano Day”.

Ash casts of the victims of the 79 A.D. of Vesuvius.

UPDATE: While we’re at it, here are a few articles about the anniversary. I’ll add any more I run across (and feel free to add your own in the comments).

– CBS News: Not much content, but some decent images (real and fake).

Piles of news from the last week or so including a look back at Eyjafjallajökull’s eruption, shots of Sakurajima and Chaiten from space, mud volcanoes on Mars and tourism in Vanuatu