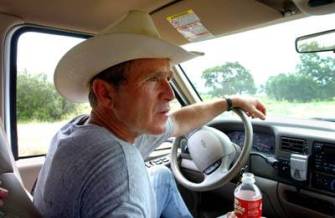 As usual, global warming is no where close to being a major topic of debate in the upcoming election, despite the fact that 2006 will be a historic high in amount of coverage at the New York Times and Washington Post.

Global warming fails to receive more attention at election time, in part, because candidates look at the topics that poll as the “most important issues facing the country” and see that global warming places as low as 10 or 11 in the public’s rankings. (As I detailed on my former blog site, even Al Gore in 2000 was snagged by this paradox , go here for more.)

There’s also sharp partisan differences in the priority afforded global warming. For example, this 2006 Pew survey finds that among Republicans, global warming polled way below flag burning and the inheritance tax in importance (See page 5 of the PDF report.)

For a systematic review of twenty years of public opinion trends on global warming that I have under review, I took a look at the few publicly available polling items evaluating President Bush’s performance and policies on global warming. Here’s what I found…


Bush’s decision to withdraw from the Kyoto treaty generated harsh criticism not only from environmentalists and Democrats, but also from many scientists. In 2001, among these critics, various attributions were given as to the Bush administration’s motivations, many claiming that the decision to withdraw from the Kyoto treaty reflected the President’s close ties with the energy industry. These critics also pointed to Bush’s 2000 campaign pledge to cut greenhouse gas emissions, and wondered why he had passed on the chance to make good on his promise.

Based on the results of two surveys taken in the spring of 2001, the public appears to side with the interpretations of critics. When asked why they believed Bush reversed his decision on reducing C02 emissions, 53% and 45% said they believed it was because of special interest pressure compared to the 29% and 36% who said it was based on genuine doubts about scientific evidence and the impact on energy prices.

In February of 2004, the Union of Concerned Scientists teamed with a group of Nobel laureates to allege that Bush was distorting scientific evidence across a number of topics, ranging from stem cell research to global warming. Yet according to an April 2004 survey, only 8% of the public reported hearing “a great deal about the allegations,” and only 26% “a moderate amount,” compared to the 40% who answered “not much,” and the 26% who answered “nothing.” However, when asked who they believed in the matter, either the scientists or the Bush administration, 59% answered the scientists compared with 32% who sided with the administration.

More recent polling from 2006 indicates that a strong majority of the public disagrees with the president’s position on global warming. In July, when Pew asked respondents whether they approved or disapproved of the way Bush was handling the issue of global warming, 26% approved, compared to 44% who disapproved, and 30% who had no opinion or didn’t know. Later that same month, the LA Times found that 58% of respondents believed the president was doing “too little” on global warming, compared to 29% who believed the “right amount,” 3% too much, and 10% who didn’t know.