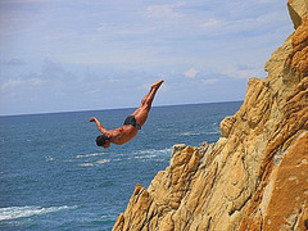 I’ve heard a lot about these Acapulco cliff divers (clavadistas), and will finally get a chance to see them in action this week during a trip to Mexico. I’m willing to bet that there is a lot you can learn about innovation from these brave souls who dive from rocky cliffs to the ocean below. There must be a finely-honed process passed down from generation to generation for avoiding near-certain death on the rocks below. After all, according to Acapulco legend, there has never been a death from cliff-diving!

However, the process of cliff-diving looks so spectacularly scary that many people think it’s kinda like magic. Which is the same thing people think about innovation – that it’s so scary that only a few people are qualified enough to carry it out. Innovation done properly, though, is something that can be embraced by everyone within the organization.

Which is all a roundabout way of saying that I’ll return next week after a quick “business trip” to Acapulco. (At least, that’s what I’m telling the IRS next year…)