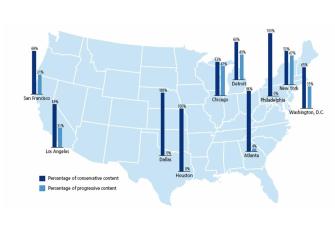 The Center for American Progress has released a valuable analysis of the factors that account for the huge ideological imbalance in political talk radio. Here’s what they pinpoint as the driving forces:

Our conclusion is that the gap between conservative and progressive talk radio is the result of multiple structural problems in the U.S. regulatory system, particularly the complete breakdown of the public trustee concept of broadcast, the elimination of clear public interest requirements for broadcasting, and the relaxation of ownership rules including the requirement of local participation in management. Ownership diversity is perhaps the single most important variable contributing to the structural imbalance based on the data. Quantitative analysis conducted by Free Press of all 10,506 licensed commercial radio stations reveals that stations owned by women, minorities, or local owners are statistically less likely to air conservative hosts or shows. In contrast, stations controlled by group owners–those with stations in multiple markets or more than three stations in a single market–were statistically more likely to air conservative talk. Furthermore, markets that aired both conservative and progressive programming were statistically less concentrated than the markets that aired only one type of programming and were more likely to be the markets that had female- and minority-owned stations.

Related
The Future
Custom Image Test
Lorem ipsum etc etc etc etc
Life
Visualization test
Lorem ipsum dolor sit amet, consectetur adipiscing elit. Nullam id tincidunt mi. Morbi malesuada nulla sit amet est hendrerit tincidunt. Etiam viverra, nisl id volutpat eleifend, est augue sodales orci, […]
L&D Strategy
Transfer of learning: The necessary step to make learning stick
Transfer of learning is a concept that should be top-of-mind when planning any learning and development program. Why? In a perfect world, the billions of dollars organizations collectively spend every […]
Starts With A Bang
Why we’ll never see back to the beginning of the Universe
We thought the Big Bang started it all. Then we realized that something else came before, and it erased everything that existed prior.
Thinking
Is there an afterlife? See how your answer compares to polled Americans
There is more consensus on what heaven looks like than hell.
Up Next
Guest Thinkers
ATHEISM IS NOT A CIVIL RIGHTS ISSUE
One of the common claims that has been amplified by the Dawkins/Hitchens PR campaign is that “atheism is a civil rights issue.” (For an example, see the comments section of […]