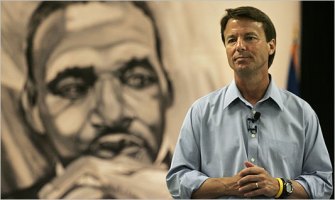 I watched Edwards’ interview Friday night and it was pretty clear that he had help from crisis communication experts, delivering a narrative about a man who had come from a modest background only to succumb to hubris in his quest for power. With his southern charm and his trial lawyer poise, I thought it was a brilliant performance, though questions obviously linger about payments to his mistress and whether or not he really is the father of the child.

Of course, going head to head with the Olympics, only 3 million people actually watched the interview, but that was part of the strategy.

Yet, despite Edwards best attempts to bury attention to the revelation, and even though the story broke on a Friday, it still generated a considerable amount of overall news attention. According to Pew, the scandal registered as the #4 most widely covered topic of the week, filling 4% of the newshole in comparison to 6% for domestic terrorism, 11% for the Olympics and 24% of the newshole filled by the election.

So what should Edwards do now? The former candidate should stay under the political radar until late 2009, then re-emerge sporting a beard, having gained some weight, and dedicating the rest of his life to combating poverty. Edwards should become the Al Gore of poverty.

(Ok, I was just joking about the beard.)

Indeed, for Edwards, it would be a public communication challenge just as daunting as breaking through to Americans on global warming. I wrote a report about this challenge last year, arguing that poverty needs to be redefined in terms of social inclusion and low wage work.

I don’t pretend to have the answers for a breakthrough on poverty, but the report does address the current problems with many contemporary communication efforts and points to several ways forward.

Related
Life
Visualization test
Lorem ipsum dolor sit amet, consectetur adipiscing elit. Nullam id tincidunt mi. Morbi malesuada nulla sit amet est hendrerit tincidunt. Etiam viverra, nisl id volutpat eleifend, est augue sodales orci, […]
L&D Strategy
Transfer of learning: The necessary step to make learning stick
Transfer of learning is a concept that should be top-of-mind when planning any learning and development program. Why? In a perfect world, the billions of dollars organizations collectively spend every […]
Starts With A Bang
Why we’ll never see back to the beginning of the Universe
We thought the Big Bang started it all. Then we realized that something else came before, and it erased everything that existed prior.
Thinking
Is there an afterlife? See how your answer compares to polled Americans
There is more consensus on what heaven looks like than hell.
Thinking
How science changes the way we think, according to 10 leading scientists
A group of prominent scientists shares how research has changed them.
Up Next
Guest Thinkers
Gore’s “A Path to Survival” Available June 9, 2009
In case you were wondering, Gore’s much anticipated follow up book–where he is scheduled to detail his proposed policy actions–is due out about five months into the next administration.