The Great Earthquake Swarm at Yellowstone that ushered in 2010 seems to be dying down, at least according to the USGS earthquake reports and analysis of the seismicity by the University of Utah and YVO. The daily updates on the earthquake swarms by Utah has ended. Looking at the earthquake over the last 7 days (see below), you can notice three things quickly: (1) since 2/6, there are much fewer quakes compared to a week and a half ago; (2) any sign the earthquakes were getting shallower seems to have ended; and (3) they seem to be generally smaller (the everyday business of being an active caldera system – the crust will adjust along ring fractures in/around the caldera, the crust will rise/fall depending on the degassing magma or changes in hydrothermal circulation (that can be dictated by meteoric water – rain/snow), and even some movement of melt in the magmatic system deeper in the crust. 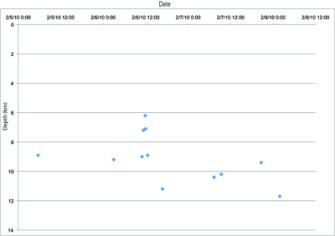 Seismicity in Yellowstone caldera from 2/5-2/11. Note that no earthquakes have occurred in the swarm area since 2/8. The error on the depths is ~0.5-1 km.

All these things can and will happen without eruption at Yellowstone – double (triply?) so without a so-called “supervolcanic” eruption. Not to come down on the hyperbole out there about Yellowstone, but getting overly worried about every earthquake swarm we see at the caldera is the equivalent of running for the tornado shelter every time you see a cloud. Sure, the cloud could get worse and produce a tornado, but the chances are very small. In the same way, earthquakes could be the predecessor for an eruption at Yellowstone, but chances are small (and likely minute when it comes to a giant eruption). We learn something new about the caldera all the time, whether it be what these earthquake swarms mean, what state the magma chamber might be, how the hydrothermal circulation changes – and I’d be the first to admit we only know a fraction of what is to be known about Yellowstone, but I know the folks at YVO and Utah take the threat seriously, so when these events happen, they know what to watch. You can count on that.

Laacher See: The caldera in the middle of Europe

Over 12,000 years ago, a caldera in the middle of Germany spread ash over Europe – and the Laacher See still seeps carbon dioxide.