It’s a familiar model: a solar system comprised of several planets orbiting a sun. And it’s mostly true. However, it’s not always true. A study just published in the Monthly Notices of the Royal Astronomical Society announces the discovery of four Earth-sized planets roaming freely through the universe on their own.

One last victory for Kepler

The find is a late-life triumph for the aging Kepler Telescope, which was retired in October 2018. Evidence for the planets appears in data from its K2 data collection mission that began when the craft’s four gyroscope wheels, which allowed scientists to point Kepler at specific objects, failed in 2013.

“Our observations pointed an elderly, ailing telescope with blurred vision at one of the most densely crowded parts of the sky,” says lead author of the study Iain McDonald of the University of Manchester, “where there are already thousands of bright stars that vary in brightness, and thousands of asteroids that skim across our field.”

The K2 missions consisted of a series of campaigns in which the space telescope could observe star fields visible from the Earth’s ecliptic plane as it orbited the planet. During these campaigns, mission controllers were able to keep Kepler in position by firing its thrusters and using its remaining pair of wheels. Each campaign lasted 80 days, after which the sun’s angle changed and solar winds disrupted control of Kepler’s attitude — that is, its angular orientation. 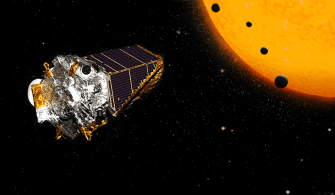 Kepler was originally designed to detect exoplanets using the “transit method” that looks for dips in the brightness of celestial objects (such as stars) as other objects (such as planets) pass in front of them. The craft detected thousands of exoplanets during its primary mission. However, this method only works for planets orbiting stars, and the Royal Academy astronomers were interested in looking for rogue planets.

Enter microlensing. Albert Einstein predicted 85 years ago that general relativity would allow objects to be seen due to microlensing, an effect that increases a distant object’s brightness as nearby objects pass in front of it. This brief magnification effect could last anywhere from hours to a few days. These signals might be so subtle, says co-author Eamonn Kerins of the University of Manchester, that “Einstein himself thought that they were unlikely ever to be observed.”

Poring through 2016 K2 data, the study’s authors identified 27 short-duration microlensing candidates in the crowded star field, most of which were confirmed by observations from other systems. Four, however, were brand-new discoveries. Their super-brief durations suggest four lonely objects approximating the Earth in mass floating through space.

It is not yet known what would cause a planet to break free from its star, though it has been theorized that the gravitational pull of large nearby objects may yank them from the grasp of their solar system.

Still, rogue planets may not be uncommon. NASA says there may be twice as many free-floating Jupiter-mass planets as stars. Astronomers from the University of Leiden in the Netherlands say there are likely to be billions of rogue planets careening through the Milky Way. And astronomer Simon Portegies Zwart proposes that even our own solar system may have lost a Neptune-sized planet long ago.

We thought the Big Bang started it all. Then we realized that something else came before, and it erased everything that existed prior.
Starts With A Bang

The science fiction dream of a traversable wormhole is no closer to reality, despite a quantum computer’s suggestive simulation.
Starts With A Bang

It’s not only the gravity from galaxies in a cluster that reveal dark matter, but the ejected, intracluster stars actually trace it out.
Hard Science

Perhaps wormholes will no longer be relegated to the realm of science fiction.
Starts With A Bang

Ask Ethan: How vulnerable is Earth to a solar flare?

A Carrington-magnitude event would kill millions, and cause trillions of dollars in damage. Sadly, it isn’t even the worst-case scenario.
Up Next
Neuropsych

Theoretical physicist Leonard Mlodinow offers three strategies for relaxing your cognitive filters to give your brilliant ideas time to shine in the spotlight of the conscious mind.