Our Moon likely had a very violent past, reveals new research. A group of international scientists discovered that the ancient rocks of the Moon were likely formed as a result of impacts from giant meteorites.

The scientists, led by researchers of the Royal Ontario Museum (ROM), analyzed a rock brought from the Moon by NASA astronauts of the 1972 Apollo 17 mission. The found it was created at the scorching temperatures of over 2300 °C/ 4300 °F. You get this much heat when the outer layer of a planet undergoes a major hit.

Further clues of the rock’s origins in meteorite bombardment were revealed by the traces of cubic zirconia, a diamond-substitute that forms at temperatures above 2300 °C. The crystal eventually changed to the more stable mineral baddeleyite around 4.3 billion years ago, but it still betrays its initial structure.

Moon mission 2.0: What humanity will learn by going back to the …

Dr. Lee White, Postdoctoral Fellow at the ROM, explained that the Moon’s rocks can be invaluable in figuring out the history of our planet.

“Rocks on Earth are constantly being recycled, but the Moon doesn’t exhibit plate tectonics or volcanism, allowing older rocks to be preserved,” shared Dr. White. “By studying the Moon, we can better understand the earliest history of our planet. If large, super-heated impacts were creating rocks on the Moon, the same process was probably happening here on Earth”. 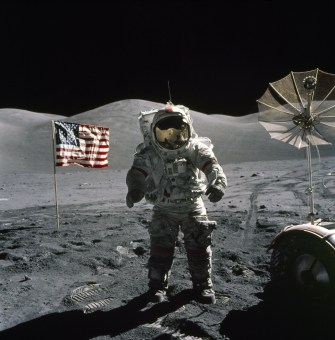 Apollo 17 commander Eugene A. Cernan stands by the American flag during his second space walk. He was the last man to walk on the Moon on December 12, 1972. Photo by NASA/Donaldson Collection/Getty Images.

The study’s co-author Dr. James Darling from the University of Portsmouth stated that the new analysis of the samples upends the view of the Moon’s geology. “These unimaginably violent meteorite impacts helped to build the lunar crust, not only destroy it,” he added.

Check out the study in Nature Astronomy.

Why are some psychopaths ‘successful’? It may depend on one personality trait

What makes some psychopaths better able to control their antisocial tendencies?