After discovering an extraordinarily well-preserved fossil, scientists have classified a new species of extinct mammal: Adalatherium hui, or “crazy beast.”

It’s likely the most complete Gondwanatherian skeleton that’s ever been discovered. Gondwanatheria is an extinct group of mammals that roamed the ancient supercontinent of Gondwana in the Southern Hemisphere 70 million years ago, during the Maastrichtian age of the Late Cretaceous.

Today, the land that was Gondwana is Madagascar. Like many large and isolated islands, Madagascar is known for its unique flora and fauna that have evolved over the ages since it separated from the Indian Plate about 88 million years ago. 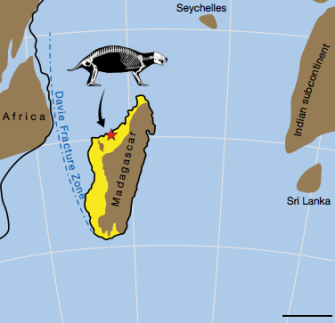 The newly reported “crazy beast” species is unique, in part, for its weight: about 3 kilograms, or 6.6 pounds. That may seem small. But this badger-like creature would’ve been relatively big for its time, when most mammals that coexisted with dinosaurs were about the size of a mouse.

“Long isolated places produce very unique results in biology,” Guillermo Rougier, a paleontologist at the University of Louisville and co-author of the paper, said in a press release. “These fossils keep reminding us of the unexpected forms and shapes that evolution can take over long periods of time in an isolated place.” 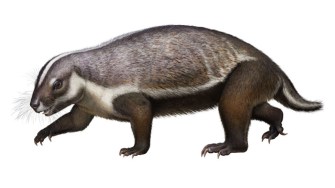 One such unexpected feature: a bone in its snout that had disappeared millions of years earlier in the ancestors of modern mammals.

“Knowing what we know about the skeletal anatomy of all living and extinct mammals, it is difficult to imagine that a mammal like Adalatherium could have evolved,” vertebrate palaeontologist David Krause from the Denver Museum of Nature & Science, who helped discover the skeleton during an expedition in Madagascar in 1999, told Science Alert.

“It bends and even breaks a lot of rules.”

Adalatherium hui is also distinct for its teeth, which are arranged backward compared to all other mammals, suggesting the creature evolved from a remote ancestor uncommon to similar species.

Gondwanatherians were once thought to be related to modern sloths, anteaters and armadillos. But as lead study author Dr. David Krause told the New York Institute of Technology, this group of mammals is “now known to have been part of a grand evolutionary experiment doing their own thing, an experiment that failed and was snuffed out in the Eocene, about 45 million years ago.”

Darwin, Descartes, and Maxwell all believed in these science ‘demons.’
▸
7 min
—
with
Jimena Canales
Up Next
Neuropsych

COVID surprise: Kids are doing all the stuff their helicopter parents used to do for them

Young people could even end up less anxiety-ridden, thanks to newfound confidence