When it comes to climate change, we all know what the problem is. There’s too much CO2 in the atmosphere. This atmospheric composition lets energy from the sun in, but doesn’t let it out, causing the planet to warm as a result. There’s a straightforward line of thinking when it comes to solving this problem: If there’s too much CO2 in the atmosphere, why not just suck it all out? Human beings are smart; we’ve invented tools that can handle this task. It’s called carbon capture and storage (CCS), and, on the face of it, it seems as though it would handle our main problem pretty well.

Here’s how CCS technology works. There are a variety of methods, but one of the most common is to install a machine at the source of the pollution, like a coal plant, for instance, and pass the polluting gas through a liquid solution. This solution contains chemicals similar to ammonia which sticks to the CO2. Everything else bubbles through the solution, and the result is a CO2-free gas. Then, you can heat the solution up to unbind the CO2 molecules, allowing you to reuse the liquid and store the CO2 for whatever purpose you have in mind.

This approach really only works when attached to a source of CO2 like a power plant, since CO2 in the air is extremely dilute. (Though we’ve started to see the first few facilities designed to scrub CO2 directly from the atmosphere!) Luckily, researchers believe that when CCS technology like this is implemented at a coal plant, for instance, it can reduce CO2 emissions by 85 to 95 percent.

Or at least, that’s what we’ve thought. New research published in the journal Energy & Environmental Science shows that this reduction may actually only amount to between 10 and 11 percent. Scrubbing 85 to 95 percent of CO2 from the gas produced by a coal plant is what CCS technology should do in theory. But in practice, the nature of CCS tech actually incurs further, additional costs that affect this rate, and researchers often ignore the upstream and downstream costs of CO2 scrubbing. 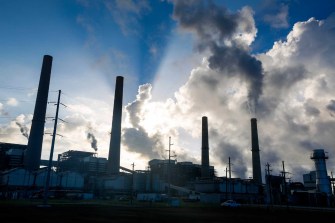 Studying CCS in the field

Rather than use CCS, the researchers found, it would be far more beneficial to just use renewable energy like wind or solar power in place of coal or natural gas. In coal or natural gas plants, there are upstream emissions associated with those industries that can’t be accounted for by CCS, such as the emissions associated with extracting and transporting fuel or fuel leaks. Furthermore, fossil fuel plants pollute in a wide variety of ways, not just through CO2. CCS technology is only geared towards scrubbing CO2 from gases, not carbon monoxide, nitrous oxides, mercury, or other chemicals. Then there’s the fact that CCS technology also requires a significant amount of electricity to run, increasing our reliance on fossil fuels.

Then there’s perhaps the most fundamental issue with CO2 capture — there’s no incentive to store it long term, while there are incentives to use it for fundamentally counterproductive purposes. Funnily enough, extracted CO2 is often sold to oil and gas companies who can use it to coax more crude oil out of depleted wells. This is actually presented as a positive thing, since it traps the CO2 underground. But it doesn’t get around the fact that we’re just replacing the CO2 we take out of the atmosphere with more CO2.

To get around the costs associated with powering CCS technology, the researchers also analyzed the scenario where a CCS solution in a coal or natural gas plant was powered by wind turbines or solar panel array. While this did improve the CCS technology’s efficiency, it still didn’t account for the upstream emissions or other pollutants released by the plant.

Even if CCS tech was 100 percent efficient — which nobody has ever claimed — coal and natural gas plants would still be offloading the externalities of burning fossil fuels on society, whether that’s in the form of alternate pollutants, upstream greenhouse gas emissions, or the continued extraction of even more fossil fuels. The researchers concluded that so long as inherently dirty fuels are used to provide us with power, no CCS technology could put these power plants on par with clean energy.

Our efforts are best directed at replacing these power plants with wind turbines and solar panel arrays. In an ideal world, there would be technology capable of scrubbing the air itself — not carbon sources — of CO2 at scale, with incentives to sequester that carbon. This may not be a politically or economically practical solution, but that’s not necessarily a bad thing. Reforestation offers a carbon sequestration solution that requires very little upkeep, and, combined with renewable energy technologies, could do a far better job of addressing the little problem we have with our atmosphere.

Bend it. Stretch it. Use it to conduct electricity.
Strange Maps

Caffeine does something, but it’s not clear exactly what.
Hard Science

It’s on a 100,000-year timescale, though, so the next few centuries might not be so comfortable.
Up Next
Starts With A Bang

6 Steps Everyone Can Take To Become An Ally In White, Male-Dominated Workplaces

If fair treatment for all is something that’s important to you, here’s how you can help level an uneven playing field.In some ways, it’s true that life isn’t fair for each […]