Called the end-Permian mass extinction or the Great Dying, this most severe of extinction events wiped out about 90 percent of the planet’s marine species and 75 percent of terrestrial species. While scientists long have suspected it was initiated by volcanic eruptions in what is now Siberia, until now they haven’t been able to explain exactly how so many species died out.

A new paper published in Nature Communications lays out the case that nickel particles that became aerosolized as a result of eruptions in the Siberian Traps region became dispersed through the air and water and were the cause of the ensuing environmental catastrophe. The paper pinpoints huge Norilsk nickel sulfide ore deposits in the Tunguska Basin that “may have released voluminous nickel-rich volcanic gas and aerosols into the atmosphere” as the start of the chain of events that led to the mass extinction.

The study is based on analysis of nickel isotopes that came from late Permian sedimentary rocks gathered from the Buchanan Lake section in the Sverdrup Basin in the Canadian High Arctic. What’s notable about the rock samples is that they featured the lightest nickel isotope ratios ever measured, leading the scientists to conclude that the nickel came in the form of aerosolized particles from a volcano.

As the paper outlines, the only comparable nickel isotope values would be those from volcanic nickel sulfide deposits. The scientists write that of all the mechanisms that could result in such values, “the most convincing” explanation is that they got there as “voluminous Ni-rich aerosols” from the Siberian Traps large igneous province (STLIP).

The deadly effect of nickel particles

When the nickel got into the water, it wreaked havoc on the underwater ecosystem.

Co-author of the study, associate professor Laura Wasylenki of Northern Arizona University, explained that “nickel is an essential trace metal for many organisms, but an increase in nickel abundance would have driven an unusual surge in productivity of methanogens, microorganisms that produce methane gas. Increased methane would have been tremendously harmful to all oxygen-dependent life.” This would have affected living creatures in and out of the water. The professor believes their data offers direct evidence that links nickel-rich aerosols, changes to the ocean, and the mass extinction that followed. “Now we have evidence of a specific kill mechanism,” she added. 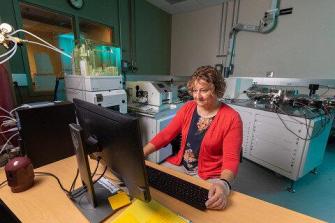 Other theories on the Great Dying

Previous studies have pointed to other effects of the Siberian volcanic eruptions that likely contributed to the extinction event, including an overall warming of the planet, release of toxic metals, and acidification of the oceans, which likely killed off a number of species quickly. Others died out as a result of the depleted oxygen levels in the water.

“This domino-like collapse of the inter-connected life-sustaining cycles and processes ultimately led to the observed catastrophic extent of mass extinction at the Permian-Triassic boundary,” said marine biogeochemist Hana Jurikova of the University of St. Andrews in the UK, who carried out a 2020 study on the end-Permian extinction. Her study looked at fossil shells from brachiopods in what is now the Southern Alps in Italy.

A vertical map might better represent a world dominated by China and determined by shipping routes across the iceless Arctic.
The Future

Synthetic milk is not a sci-fi fantasy; it already exists.
High Culture

Climate activists’ brand of iconoclasm is far removed from the Beeldenstorm that swept medieval Europe.
Up Next
The Future