A group of experts at the Architecture of Emergency climate summit in London have identified an unlikely source of greenhouse gas emissions: concrete.

“If we invented concrete today, nobody would think it was a good idea,” said architectural engineer and panel member Michael Ramage. “We’ve got this liquid and you need special trucks, and it takes two weeks to get hard. And it doesn’t even work if you don’t put steel in it.”

The four billion tons of concrete produced for construction each year accounts for 8 percent of the world’s carbon dioxide emissions, mainly through the production of clinker. Clinker serves as a crucial binding element in cement, the primary ingredient of concrete, and is produced by heating limestone and clay to around 1,400°C (about 2,500°F). Heating limestone (CaCO3) to these temperatures, however, causes a chemical reaction called calcination that results in lime (CaO) and carbon dioxide (CO2) as a waste product. Roughly half of concrete’s carbon dioxide emissions is due to calcination, while another 40 percent comes from burning fossil fuels to heat up limestone to the point where this chemical reaction can occur. The last 10 percent comes from the fuel used in the mining and transportation process.

Eight percent might seem like a large slice of the world’s carbon dioxide pie, but architectural experts haven’t been particularly concerned about this figure until recently. The reason why has to do with concrete’s longevity. Normally when calculating a building’s total carbon emissions, said Phineas Harper of Dezeen magazine, architects take the amount of carbon needed to construct a building and divide it over the building’s total lifespan. “That gives you your per-year carbon emissions,” said Harper. However, in our current climate situation, this kind of thinking is “dead wrong.”

Had we taken climate change more seriously a hundred years ago, this would probably be fine. But as it stands today, we have only a few short years before we reach climate “tipping points,” events that create negative feedback loops in the climate that are very difficult to reverse. The melting of polar ice, which reflects sunlight and contains locked-away greenhouse gases, is a well-known example of such a tipping point. So too is deforestation in rainforests, which increases the likelihood of local droughts, killing even more trees.

As a result, the front-heavy carbon load of concrete buildings inadvertently contribute more to climate change than any straightforward calculation may suggest.

So, if we can’t build sustainably with concrete, what other materials can we build with? Ken de Cooman, founder of BC Architects & Studies, discussed how his firm is using materials primarily formed from the earth, like compressed-earth bricks. There are also biocomposite materials, which are formed out of natural fibers embedded in a matrix. Hempcrete, for instance, is a biocomposite of hemp and lime that is actually carbon negative since hemp absorbs CO2 as it grows.

Interestingly, one of the best candidates for replacing concrete in construction projects is something of an old-fashioned solution — timber. One might wonder if using timber is all that wise given the importance of forests in maintaining the health of our environment, this might seem counterintuitive. Ramage acknowledged that building out of timber would require sustainable practices. In order to make construction using timber sustainable, a number of trees would have to be planted for every tree that is cut down. And, added Ramage,”It’s important to remember that every kilogram of timber we build with holds the equivalent of 1.8 kilograms of carbon dioxide.” Unlike concrete, timber stores carbon dioxide, lowering a building’s overall carbon footprint. 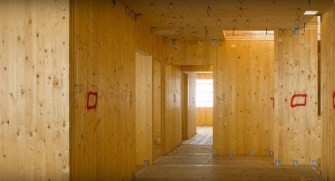 As an example of this, architect Andrew Waugh described a building his firm built in North London.

“We built the entire building from solid timber from the first floor up. So all the internal walls, external walls, lift shafts, staircases, all in timber. … It’s about 2.8 trees per person that live in that building and for every one of those trees that was cut down to build that building five more were planted in its place.”

Timber is growing in popularity as a construction material, both because of its greater sustainability and because of advances that have enabled it to be used in taller buildings, like cross-laminated timber. These developments have not left the concrete industry too happy, which has taken out advertisements emphasizing the flammability of timber buildings and the environmental impacts of cutting down trees.

“We must be doing something right,” said Waugh, “because, much like the tobacco industry in the 1980s and 1990s, Big Concrete is beginning to fight back.”

Reversing that momentum will mean cutting back on fossil fuels, eating meat, building in concrete, and many more activities that we have taken for granted.

Update Tuesday, October 15, 2019: This story was updated to specify when and how carbon emissions are released during the cement production process.

Bend it. Stretch it. Use it to conduct electricity.
Strange Maps

It’s on a 100,000-year timescale, though, so the next few centuries might not be so comfortable.
Up Next
Think Again Podcasts

the Epicurean cure for what ails ya, with philosopher Catherine Wilson

From atomic theory to evolution to utilitarian pragmatism, the ancient Greek philosopher Epicurus was way ahead of his time. In the writings of his school, philosopher Catherine Wilson finds answers to many of our most vexing modern problems.