Researchers were treated to quite the discovery after sifting through some old fossil contents collected from clams in a Sarasota County quarry. They found dozens of translucent glass beads, just a pinprick smaller than a grain of sand, all of which are likely to be extraterrestrial in origin.

After careful analysis, scientists now believe they may be “microtektites,” particles that form when an explosive impact occurs from a meteorite and its molten debris flies back into planet’s atmosphere. The end result? A crystalized substance that falls back to earth in the form of sparkling small teardrops or “pearl-shaped” spheres.

This discovery came as a surprise, as the material had been sitting in a box for a little over a decade. According to the researchers:

“. . . Florida is well known for its fossiliferous shell beds, but not for its extraterrestrial material.”

Sometime in the summer of 2006, University of South Florida student Mike Meyer, went collecting shell fossils for a fieldwork project. Down in the quarry, he was exposed to shell fossils that were a couple million years old. These painted a rich picture of Florida’s geological history and held many secrets in their hardened shells.

While searching for the shells of an organism called benthic foraminifera, however, he came across numerous, glimmering glassy pearls inside the fossils. They were tiny

“They really stood out. Sand grains are kind of lumpy, potato-shaped things. But I kept finding these tiny, perfect spheres,” he recounts.

Working with the Florida Museum of Natural History invertebrate paleontology collections director, Roger Portell, Meyer sought to find out more about these little orbs. But initial replies to his inquiries left him with nothing. So he packed up the findings and put them away for years. 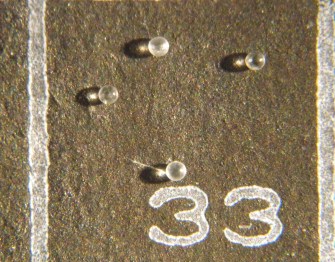 Eventually, Meyer decided to take another stab at figuring out just what these things were. His initial hypothesis was that they were the byproduct of volcanic ash or some other kind of industrial process. But, after finding exotic trace metals he had enough evidence to confidently place these “pearls” as having origins in outer space.

“It did blow my mind,” Meyer said.

Florida’s museum and the researcher’s recent scientific paper, points toward these being the first documented microtektites in not only Florida, but also the first of their kind to be found inside fossil shells.

Meyer placed all of the microtektites on micropaleontology slides, in doing so, he ingested a few. By licking a paintbrush to pick up the orbs to move them to dots of glue, he “accidentally eat a couple of them.”

It’s estimated that these cosmic orbs may be anywhere from 2,000,000 to 3,000,000 years old. They could have formed during a meteorite impact in the Florida region.

Meyer’s colleague Portell mused that, “It could be that they’re from a single tektite bed that got washed out over millennia or it could be evidence for numerous impacts out on the Florida Platform that we just don’t know about.”

Meyer suspects that there’s more where that came from and fossil collectors should be on the lookout.

Update Friday, July 26, 2019: The microtektites usually form into small teardrop or “pearl shaped” spheres. Like other types of sediment, the material begins to drop down into the sea. Somehow, coincidentally, they got picked up by the clams and subsequently fossilized inside them, allowing them to retain their pearl shape for millions of years.

A medical entomologist points to metabolism, body odor, and mindset.
The Past

Was our distant ancestor a biped or not – i.e., human or not human?
The Past

Should you blast the A/C even when you’re not at home?
Up Next
Health