Beyond the fringes of our known solar system orbits a newly discovered object, 2015 TG387. Its nickname? The Goblin. It has an extremely elongated orbit, never coming closer to the Sun than about 65 astronomical units, or AU. (Each AU is the distance from the Earth’s to the Sun.) Pluto, by way of comparison, is about 34 AU. At its most distant, 2015 TG387 gets about 2,300 AU out from the Sun. TG387 was discovered by Carnegie Institute for Science’s Scott Sheppard, Northern Arizona University’s Chad Trujillo, and the University of Hawaii’s David Tholen, and revealed this month. It may provide yet another clue that there’s a Planet X too far out for us to see. 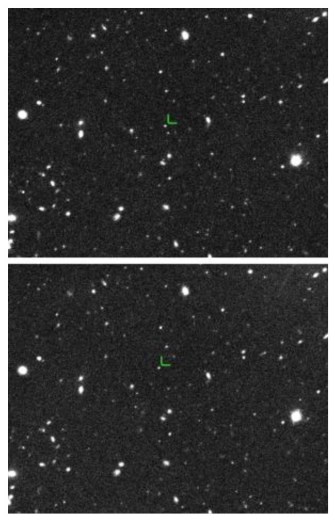 2015 TG387 has the third most most distant parhelion — its orbit’s closest point to the Sun — of the distant objects we’ve begun to detect. The most distant? That honor goes to another object that Sheppard and Trujillo found, 2012 VP113, which gets only as near 80 AU to the sun. Sedna takes second place, with a 76 AU parhelion.

According to Tholen, speaking to Carnegie Science, “We think there could be thousands of small bodies like 2015 TG387 out on the Solar System’s fringes, but their distance makes finding them very difficult.” In addition to their closest points being so far away, he says, “Currently we would only detect 2015 TG387 when it is near its closest approach to the Sun. For some 99 percent of its 40,000-year orbit, it would be too faint to see.” 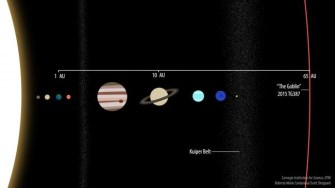 2015 TG387 was first seen in October of 2015 at the Japanese Subaru 8-meter telescope on Hawaii’s Mauna Kea. The follow-up observations that allowed scientists to chart its orbit took about three years to complete. 2015 TG387 is likely to be smallish even for a dwarf planet — it’s just 300 kilometers wide.

Computer simulations capable of explaining the three bodies’ orbits raise suspicions of a large planet out there, which is to say Planet X. After all, the three objects are too far away to be significantly influenced by the gravitational pull of the planets we know. Sheppard puts it this way:

These distant objects are like breadcrumbs leading us to Planet X. The more of them we can find, the better we can understand the outer Solar System and the possible planet that we think is shaping their orbits — a discovery that would redefine our knowledge of the Solar System’s evolution. 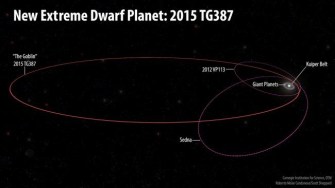 The unseen planet, called by many “Planet X,” is predicted to be about twice the size of Earth. It was first proposed in 2016 by Konstantin Batygin and Michael Brown of Caltech who called it “Planet 9.” (Take that, Pluto.)

In the simulations run by Trujillo and University of Oklahoma’s Nathan Kaib, they experimented with different possible Planet X orbits, and found that most were compatible with not only 2015 TG387’s orbit but also with those of 2015 VP113 and Sedna. Its presence would also explain why the three have such similar orbits. As Trujillo says, “What makes this result really interesting is that Planet X seems to affect 2015 TG387 the same way as all the other extremely distant Solar System objects. These simulations do not prove that there’s another massive planet in our Solar System, but they are further evidence that something big could be out there.”

Neil deGrasse Tyson explains why Trump’s Space Force is “not a crazy idea”.