In the second episode of his new podcast, The Portal, mathematician Eric Weinstein takes current scientific methods to task, claiming that peer review, while touted as a necessary process of discovering provable facts, is actually a hindrance. In his words, the common practice in the scientific community is “an intrusion into the hard sciences.”

The need for verification from others dampens the potential for imagination, which Weinstein believes to be essential for stretching beyond what is currently known to dream the unknowable. This, he argues, is how the sciences actually evolve.

Weinstein points to a 1963 Scientific American article by Paul Dirac in which the theoretical physicist discusses the discovery of a third dimension, itself a revolutionary idea proposed by Newton, and then to four dimensions, as provided by Einstein. Imagination is required to make further theoretical leaps, which might require not listening to present-day consensus.

Weinstein notes that when Crick and Watson published their seminal 1953 paper on the double helix, Nature did not need peer review to allow its publication. “It was an editor’s job to figure out if it was worthy of publication.” Thankfully, the editors allowed it; that paper revolutionized our understanding of molecular biology. Their work is the basis of all genetic research today.

Peter Thiel on “The Portal”, Episode #001: “An Era of Stagnation & Universal Institutional Failure.”

Peter Thiel on “The Portal”, Episode #001: “An Era of Stagnation & Universal Institutional Failure.”

As Siddhartha Mukherjee writes in The Gene, Crick and Watson were playing with a model set in an attempt to construct a triple helix, which turned out to be an epic letdown. Deflated, the team did not stop there. As it turns out, after Watson had his morning coffee a few days later, they imagined the double helix while tinkering with cardboard cutouts. After quoting the poet and philosopher, Paul Valéry, Mukherjee continues,

“To see DNA is to forget its name or its chemical formula. Like the simplest of human tools — hammer, scythe, bellows, ladders, scissors — the function of the molecule can be entirely comprehended from its structure. To ‘see’ DNA is to immediately perceive its function as a repository of information.”

Later, as Weinstein mentions, Watson said that in order to make great advances we need to be irresponsible. Perceived wisdom becomes trapped in its own echo chamber; specialized sciences become their own sort of trap, as Weinstein discusses with venture capitalist Peter Thiel in episode one of The Portal.

Going against the grain to imagine new possibilities puts you at risk of being outcast by your community. Even though we all know this, most researchers seem to follow consensus regardless of what their instinct tells them, a fact that Weinstein sees as a major hurdle for the advancement of the sciences. 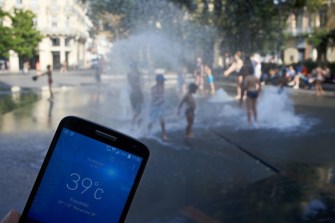 Children play in a public fountain as temperature reaches 39°C. For the 2nd time in a month, an intense heatwave is on Western Europe, particularly France. Photo credit: Alain Pitton / NurPhoto via Getty Images

What about the double-blind experiment, the gold standard of science today? Weinstein also criticizes this method, as have others: the replication problem is a serious issue in modern research. Weinstein concedes that “proof checking” is important, yet not the most important aspect of scientific methods:

“A lot of the work we do in science has been incredibly imaginative. You might even say it’s irresponsible until it comes into final form and can be reconciled with experiment. But instead we’ve developed a culture in which immediately upon proposing something, we are told that sine qua non of science is that there be an agreement between theory and experiment. This is wholly untrue.”

This is especially important today as we need to create new economic vistas to address problems associated with climate change, timely advice from the mathematician considering the record heat wave in Europe is expected to hasten the melting of Arctic ice. As the current administration is reportedly forcing entire science departments to leave Washington in hopes that many researchers will quit (they are) and their influence will wane (it is), we need all the progress we can get.

To push the boundaries of science, Weinstein says we need to start dreaming more aggressively, in public, in order to unlock the potential of human imagination. He hopes The Portal will serves as a venue for conversations that will provoke a “war on stasis, war on groupthink, war on everything that has enervated our society.”

A worthwhile goal, if only the stasis of political gridlock can be broken through and the boundaries of our imagination pushed wide open, once again.

Anything, good or bad, about Henry Ford can be contradicted — except his ambition and his work.
Up Next
The Present

Richard Lyon’s visionary plan for the future of innovation at Berkeley.