Research that aims to identify exoplanets that might contain life usually use oxygen as a biomarker. But a newstudy published in AGU Advances explains that this can be very misleading: Oxygen can easily accumulate in an exoplanet’s atmosphere without any biological origin.

Oxygen is considered a biomarker because photosynthesis — the process by which plants use sunlight to fix carbon dioxide into sugar — produces oxygen as a waste product. Thus, a planet with oxygen in its atmosphere is considered a strong candidate to host some kind of lifeform.

The team, led by Joshua Krissansen‐Totton of UC Santa Cruz, developed a model of planetary formation that allowed them to tinker with variables that could affect how an Earth-like planet develops. Using their model, the researchers were consistently able to produce three scenarios in which an Earth-like planet has levels of oxygen in its atmosphere similar to ours, but life was not part of the formula.

Three oxygenated worlds with no life 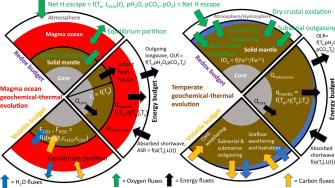 The planetary evolution model. Arrows show the flow of certain substances and heat energy between different layers of the Earth and its atmosphere.Krissansen-Totton et al./ AGU Advances

In the first scenario, an exoplanet has very high levels of carbon dioxide and water in the atmosphere. Under these conditions, a strong greenhouse gas effect means there will be no water on the exoplanet’s surface. When hit by ultraviolet (UV) light, water vapor in the upper atmosphere can occasionally split into hydrogen and oxygen. The lighter hydrogen gas escapes into space, leaving the heavier oxygen gas behind.

In the second scenario, an exoplanet “waterworld” contains anywhere from 10 to 230 times as much water as the Earth has today. Under these conditions, theoxygen cycle — which involves the circulation of oxygen through the atmosphere, lifeforms, and rocks — essentially doesn’t exist. Pressure from the massive oceans on the crust would shut down the geological activity necessary to recycle oxygen, leaving it in the atmosphere.

In the third scenario, an exoplanet “desertworld” has conditions exactly the opposite of those in the “waterworld.” This type of exoplanet has very little water, no more than a third of what Earth has in its oceans. Under these conditions, the molten surface of a young exoplanet can freeze while the limited water supply is still found only as steam (vapor) in the atmosphere. This prevents oxygen from being absorbed by the crust. Then, as with the first scenario, UV light breaks up water into hydrogen and oxygen.

Implications for the hunt for E.T. 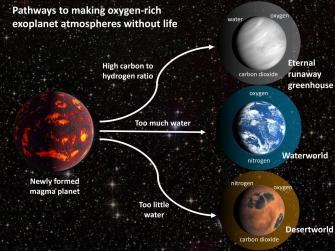 An infographic illustratingthe three planets described above and how they might form.Illustration by J. Krissansen-Totton

None of the three scenarios assures an oxygen-rich atmosphere; they simply allow for oxygen to occur abiotically. Professor Krissansen‐Totton described the utility of the model in a press release:

“This is useful because it shows there are ways to get oxygen in the atmosphere without life, but there are other observations you can make to help distinguish these false positives from the real deal. For each scenario, we try to say what your telescope would need to be able to do to distinguish this from biological oxygen.”

Such telescopes should be in orbit by 2030. Now the scientists using them know what to look for.

UAP are no laughing matter anymore.
Up Next
Neuropsych

How can researchers map something as complex as the human brain?