It doesn’t look like much to the naked eye. It’s basically an empty field, but if you caught it on the right days, you’d have seen a quad-wheel bike going back and forth while pulling an unremarkable-looking bit of not-really-farm gear. What’s been going on there is the layer-by-layer discovery of an ancient Roman town, Falerii Novi. While archaeological finds like this are always interesting, this one is special: The long-buried city has been exposed without the removal of a speck of dirt. 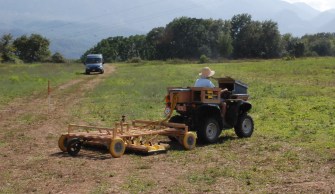 Falerii Novi was unearthed using ground-penetrating radar, or GPR. With each pass across that field, the bike pulled a rolling frame outfitted with a GPR instrument that bounced radio waves off of whatever lay beneath it. The device took a reading every 12.5 centimeters, eventually imaging the entire 30.5-hectare area. Without disturbing a single ancient artifact, GPR generated a remarkably detailed look at the lost city, with its various different layers depicting changes that occurred over time.

In the end, the researchers were confronted with 28 billion GPR data points to be processed, an almost impossibly huge task. Each hectare takes about 20 hours to work through, and the team is currently developing automation techniques that will allow them to fully explore the data collected by the GPR.

Corresponding author of the study recently published in Antiquity, Martin Millett of Cambridge’s Faculty of Classics, is clearly excited by the project:

“The astonishing level of detail which we have achieved at Falerii Novi, and the surprising features that GPR has revealed, suggest that this type of survey could transform the way archaeologists investigate urban sites, as total entities.” 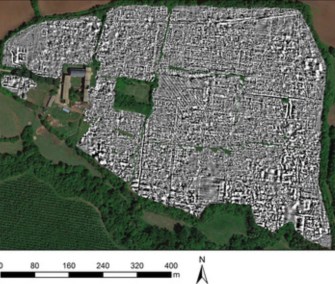 A preliminary version of the Falerii Novi mapImage source: University of Cambridge

Quite a bit was already known about the walled town of Falerii Novi. It was first occupied in 241 BC, and lasted until around 700 AD., the early days of the medieval period. It’s located about 30 miles north of Rome. The town, which was about half the size of Pompeii, has been the subject of other scanning research before, but has never been so thoroughly revealed until now. 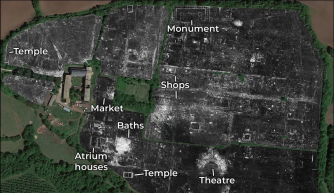 The visible Falerii Novi contains a number of surprises.

In a broad sense, the town’s layout appears less standardized than archaeologists would expect for an ancient Roman community, with a number of notable features.

There’s the mysterious pair of large structures facing each other within a porticus duplex located at the town’s northern gate at the upper edge of the image above. Experts have no idea what these buildings are, though they conjecture that they may have been some sort of massive monument overlooking the city’s edge.

In addition, for a small city, the temple, market building and bath complex are unexpectedly elaborate.

GPR also revealed the existence of an intriguing network of pipes that may have been a large public bathing system featuring an open-air natatio, or pool. The pipes terminate at a large rectangular building and run not just along the town’s streets, as might be expected, but also under its city blocks.

With the Falerii Novi project serving as such a stunning reason to keep using this technology for archaeology, Millet envisions many more such projects: “It is exciting and now realistic to imagine GPR being used to survey a major city such as Miletus in Turkey, Nicopolis in Greece or Cyrene in Libya. We still have so much to learn about Roman urban life and this technology should open up unprecedented opportunities for decades to come.”

The “first-of-its-kind” archeological find is being reburied despite the fact that researchers haven’t finished studying it.
The Past

Civilization was built on ceremony.
Up Next
Thinking

What better way to understand the world around us than through jokes?