Alpha Centauri, the closest star system to our own, isn’t actually close at all. While light takes 8 minutes to travel from the sun to Earth, it takes 4.37 years to travel from Proxima Centauri — that system’s star — to Earth. That’s all well and good for light, but human beings can’t go quite so fast. Voyager 1 passed the boundaries of our solar system at around 37,000 miles per hour, which seems pretty fast. This speed, though, is only 1/18,000th the speed of light; were Voyager 1 pointed towards Proxima Centauri, it would take 80,000 years.

This is a problem. If humanity is to survive in the long term, we need to become a multiplanetary species. And while we may be able to terraform other planets in our own solar system to become new homes, we will eventually need to travel to other stars. Equally important, we want to do so in order to learn more about our universe, satisfy our curiosity, and maybe even find alien life. But before we can, we’ll have to surmount some pretty significant challenges. 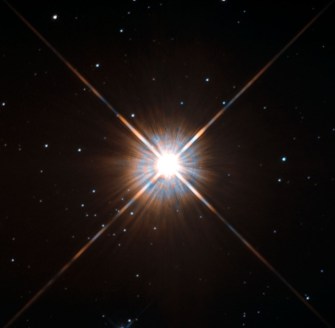 Proxima Centauri as viewed from the Hubble telescope.

Right now, we just don’t have any good methods of propelling a spacecraft at the necessary speed for interstellar travel. In order to travel far and fast, we need to carry lots of fuel. But the more fuel we carry, the more mass we need to propel through space, making the use of on-board fuel reserves for a rocket exponentially more challenging for long journeys.

Most modern spacecraft use a mixture of liquid hydrogen and liquid oxygen as fuel, but this certainly wouldn’t work for a trip to Proxima Centauri. NASA presented a quick scenario where we aimed to arrive at Proxima Centauri in 900 years with a conventional, chemical rocket without slowing down when we got there (which a real manned mission would certainly want to do). Using this method, there wouldn’t be enough matter in the universe to fuel our rocket.

So, we would need a new method. There are a few different candidate technologies that we could pursue, each of which deserves its own separate article to examine fully: there’s antimatter engines, warp drives, laser-powered light sails, and many others.

However, warp drives are entirely speculative; humanity has only succeeded in producing a little less than 20 nanograms of antimatter, and making a gram of antimatter would cost a million billion dollars; and laser-powered light sails would require a steady power source equivalent to what the Earth consumes in a day. The most likely initial engines for getting us to our stellar neighbor will probably rely on nuclear fusion, and they’ll probably need to host human life for decades, if not centuries.

Project Daedalus, a British Interplanetary Society study, examined the feasibility of this approach and found that a fusion-powered spacecraft could accelerate to 12 percent the speed of light, then cruise for a period of time before slowing down prior to reaching a distant star. If we could pull this massive undertaking off, a fusion rocket could reach our closest stellar neighbor in just 36 years, compared to the tens of thousands of years other methods would require. Unfortunately, the kind of fuel we would use (helium-3) is extremely rare on Earth, the project would cost about $5.267 trillion, and the study focused on unmanned missions. A spacecraft that could support human life would be significantly more difficult to design.

If we travel anywhere through space at significant fractions of the speed of light (almost certainly a requirement for interstellar travel), then impacting interstellar dust or larger objects like space debris or micrometeoroids could be disastrous. Even in the short trips we made during the space shuttle program, more than 100 shuttle windows were replaced after being chipped or cracked by space debris. Traveling to Proxima Centauri would be over a 100 million times the distance, and we’d almost certainly run into something.

Fortunately, actual asteroid collisions would be fairly rare. If we were to encounter any large obstacles, the same Project Daedalus that conceived of a fusion-powered spacecraft proposed using drones to eject small particles that would sweep those obstacles away. It’s also been suggested that magnetic superconductors could divert the smaller dust particles away from a hypothetical spacecraft. 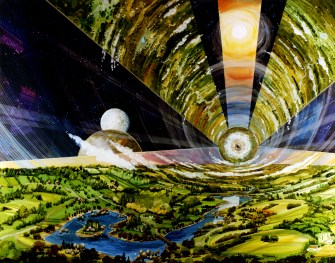 The technical challenges of interstellar travel also extend to the problem of how to preserve our mental and physical health. Outside of Earth’s protective magnetosphere, cosmic radiation can cause dementia and damage cognitive function as well as cause cancer. Fortunately, magnetic superconductors such as the one’s mentioned above may be able to protect against dangerous cosmic radiation.

There are also the challenges associated with low-gravity environments. Without gravity, our bones’ density drops by 1 percent per month, our muscles atrophy, and the risk of developing vision problems and kidney stones increases. If a spaceship were to constantly accelerate, it could mimic Earth’s gravity, but this would require more fuel, driving up the cost and engineering challenges associated with a hypothetical interstellar project.

The mind and the unknown

With enough research, we can see a path forward to solving all of these issues. But the biggest challenges may be less clear cut. How do we prevent human beings trapped on a spaceship for decades from completely losing their minds? Even after arrival, how will they contend with the idea that they most likely will never return to Earth and may never see new human beings again?

And then, there’s always the unknowns. We can plan, mitigate, develop redundancies and innovations, but there will always be something unanticipated, especially in a project whose primary goal is to explore the unknown. But then again, the reason why we explore at all is to learn more about the currently mysterious.

From questionable shipwrecks to outright attacks, the Sentinelese clearly don’t want to be bothered.

Exercise culture is crazy. But what you need to do is exceedingly simple.
▸
with
Daniel Lieberman
Strange Maps

Break into London Zoo? Illegal, but it would improve the London Circle Walk
Up Next
The Present

The U.S. states hit hardest by the federal government shutdown

Not all states are feeling the effects equally.