Everything’s a bit crazy at the moment. We’re drowning in a sea of lies, half-truths, polarization, debate, argument, and uncertainty. But at least there’s math, right? That one sanctuary of truth and certainty. It’s the algebraic flotsam we can grip on to, before we’re swept away.

Well… look away now if you like it like that, because Kurt Gödel might be about to snatch even that away. His incompleteness theorems shook the foundations of the (math) universe. In fact, he rather did away with those foundations altogether.

In the early 20th century, the famous mathematician David Hilbert laid down 23 problems for the mathematics world to solve. Some of them are particularly esoteric, but the big ones concerned the issues of math’s consistency and completeness. Hilbert hated the fact that the whole of mathematics depended on certain “axioms” that were, themselves, not proven. He wanted no loose ends, paradoxes, or unproven items. This was math after all!

Gödel, though, rather quashed all that.

Gödel would have hated what the postmodernists made of his work.

To see how, we have to first know that “axioms” are those statements that we accept as true before we go about doing math. They’re like the letters needed to make words. For example, A + B = B + A is an axiom, as are all the functions of arithmetic and so on. Simply put, axioms are the building blocks of mathematics. They’re as true for Euclid, drawing squares in ancient Greek dust, as they are for a pained 15-year-old, frowning over some calculus.

The problem is that these axioms are not proven. They’re true because they always work, and we observe them as true all of the time. But they’re not proven.

Imagine the whole of mathematics as a huge sack, and inside are all the possible things math can do. It’s a mighty big sack, indeed. What Gödel proved is that, first, there exists in this sack a set of things which cannot be proven or disproven, such as axioms. Second, there is no possible way to prove these axioms from within that sack. It’s impossible for math, on its own, to prove its own axioms.

Essentially, it’s a problem of self-reference. It’s an issue seen, too, in Russell’s paradox about sets. More famously, the liar paradox imagines a sentence like, “This sentence is false.” When you examine it closely, it creates a logical circularity. If the sentence is true, then it’s false; but then if it’s false, it’s true. It’s enough to make a robot’s brain explode. 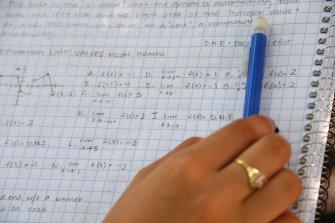 Gödel applied a similar logic to the whole system of mathematics. He took the sentence, “This statement is unproven,” and converted it into a number statement about numbers (with a code system known as “Gödel numbering”). He discovered that this proposition cannot be proven within that system.

Going even further than this, Gödel concluded that in every system that’s rich enough to allow for arithmetic, there will be a proposition within it that cannot be proven by it’s own tools. We need some kind of “meta language” to prove the rules by which a system operates. It’s a bit like how we can’t see our own eyes or draw around the hand that’s holding the pencil.

Gödel has been misrepresented, even in his lifetime. For instance, certain postmodernist philosophers used him to say, “There is no truth! Even math is groundless!” They wanted to show how everything was meaningless, and truth amounted only to opinion.

But this isn’t the point. Gödel only showed that truth does not always need to be proven. This is, of course, no small thing. To pull apart truth and provability, to allow for “unproven truths,” seems highly counterintuitive

Gödel, himself, thought there were objective truths. His theory only went to show the limitations of mathematics but not that it was flawed in any way. He would have hated what the postmodernists made of his work.

Literature’s first utopia shows how far we’ve come.
Up Next
Starts With A Bang

Ask Ethan: Why Doesn’t Every Galaxy Have A Supermassive Black Hole?

And, at some point, did the Milky Way lose ours?There are some 400 billion objects flying through the Milky Way galaxy with enough mass that — if they were all made of hydrogen […]