It’s a rhythm that preceded our presence on Earth: The moon’s inexorable push and pull on our planet’s oceans. According to researchers at University of Tromsø, The Arctic University of Norway, it turns out that the moon does more than move the tides—it also controls the release of methane into the atmosphere from below the Arctic Ocean. There’s no reason to think it’s not true in other seas as well.

This is yet another example of the complexity of global warming, methane being the other major greenhouse gas. All sorts of things are involved in keeping the environment in balance that one would never expect, like the moon. The study points out that it’s not all bad news, however, since as the oceans rise they may help the moon in controlling methane’s release.

The study is published in the journal Nature Communications. 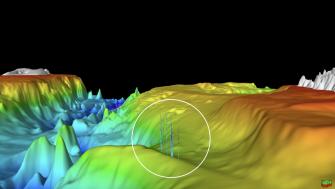 Methane often takes second billing to carbon dioxide in discussions of climate change, likely because it dissipates much more quickly. However, its warming effect is actually far more intense that CO2‘s — it is 84 times more potent. Methane makes up about 25 percent of our greenhouse gases.

Says co-author of the study Andreia Plaza Faverola, “We noticed that gas accumulations, which are in the sediments within a meter from the seafloor, are vulnerable to even slight pressure changes in the water column. Low tide means less of such hydrostatic pressure and higher intensity of methane release. High tide equals high pressure and lower intensity of the release.”

This phenomenon has not been previously observed. While significant gas hydrate concentrations have been sampled in the area, no methane release had been documented. “It is the first time that this observation has been made in the Arctic Ocean,” says co-author
Jochen Knies. “It means that slight pressure changes can release significant amounts of methane. This is a game-changer and the highest impact of the study.” 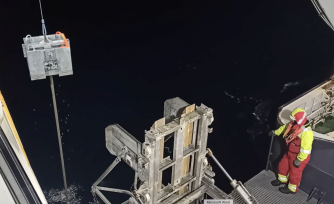 Screenshot from video of piezometer out of the waterCredit: Przemyslaw Domel

The researchers buried a tool called a piezometer in the sediment on the ocean floor, and left it in place for four days. During that time, the instrument made hourly measurements of pressure and temperature in the sediments, and these indicated the presence of methane close to the sea floor, increasing at low tide and decreasing at high tide.

Their first notable observation was, of course, the presence of the gas on the Arctic Ocean floor despite a lack of other more visible indicators of its presence. “This tells us that gas release from the seafloor is more widespread than we can see using traditional sonar surveys,” says Plaza Faverola. “We saw no bubbles or columns of gas in the water.” She credits the watchful presence of the piezometer for making the discovery: “Gas burps that have a periodicity of several hours won’t be identified unless there is a permanent monitoring tool in place, such as the piezometer.”

Enthuses Knies, “What we found was unexpected and the implications are big. This is a deep-water site. Small changes in pressure can increase the gas emissions but the methane will still stay in the ocean due to the water depth.”

Of course, not all the Earth’s waters are equally deep, and there may not be enough water weight in some places to contain the methane below. “But what happens in shallower sites?” asks Knies. “This approach needs to be done in shallow Arctic waters as well, over a longer period. In shallow water, the possibility that methane will reach the atmosphere is greater.”

The basic mechanics at play are simple. Higher tides mean more water pressing down on the methane, and this increased pressure keeps it from rising away from the sea floor. Low tide means less water, less pressure, and a greater opportunity for the methane to escape.

The researchers note in their study that this simple relationship may actually offer a silver lining to the rising of the world’s ocean as the planet cools. There will be more water, and thus more pressure to keep methane from escaping up and into the atmosphere. In essence, higher sea levels may have something of a cooling effect by keeping methane out of the atmosphere.

In the end, there’s not much we can do about the Moon and its tides, but the more knowledge we have of the mechanisms behind climate change the better.

As Plaza Faverola puts it:

“Earth systems are interconnected in ways that we are still deciphering, and our study reveals one of such interconnections in the Arctic: The moon causes tidal forces, the tides generate pressure changes, and bottom currents that in turn shape the seafloor and impact submarine methane emissions. Fascinating!”

How to have a constructive conversation with vaccine skeptics

Jonathan Berman wants us to have better dialogues.