If you’re looking up at a bright full moon and notice it’s getting smaller, you’re so slightly right that you’re closer to being wrong. The moon is shrinking, but only very slowly, and it always has been since its formation, from which it’s still cooling down. You’ve never seen it when it wasn’t shrinking.

NASA has just announced, though, that this gradual reduction in size is producing moonquakes. The seemingly lifeless satellite is actually pretty dynamic from a geological point of view, a surprise to the scientific community. Blame shrinkage. Also the pull of earth’s gravity.

The research was published May 13 in Nature Geoscience. 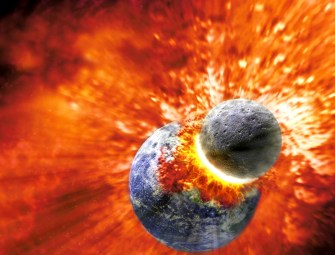 In the beginning, revised

We don’t really know how the moon formed, but there are suspicions, and the leading theory is that a Mars-sized object slammed into the Earth about 4.5 billion years ago. The object itself, as well as debris from Earth, was ejected into Earth orbit as a molten satellite that’s been slowly cooling ever since.

It took about 100 million years for it to crystallize into rocks, with the least dense of them floating upward in the slurry to form the moon’s crust and surface. As of this writing, NASA’s About the moon webpage says that, “Since the ancient time of volcanism, the arid, lifeless Moon has remained nearly unchanged.” They’ll likely update that soon — we know now that’s it’s not true. 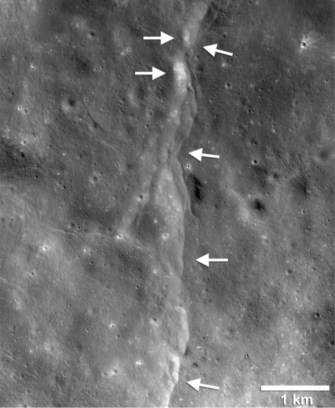 Orbiting the moon as you read this is NASA’s Lunar Reconnaissance Orbiter (LRO), which was launched in June 2009 and has been taking pictures of the Moon’s surface since it arrived in lunar orbit a year and four days later.

Captured by its high-resolution 0.5–2m per pixel cameras were a “vast network” of scarps that indicated a variety of interactions between thrust faults. In addition, the faults’ crisp appearance, as well as other characteristics, suggest that they’re pretty young in geological terms, less than 50 million years old. Though their existence was already known — Apollo 17’s Astronauts Eugene Cernan and Harrison Schmitt had to zig-zag their rover up and over the cliff face of one — the sheer number of faults, in the thousands, and their complexity was only made clear by LRO.

NASA compares the faults to the wrinkles formed on a grape’s skin as it shrinks into a raisin. The main difference is that where a raisin’s skin is soft and pliable, the Moon’s crust is brittle and thus fractures and cracks as the Moon continues to cool and shrink at a rate of about 150 feet every few hundred million years. 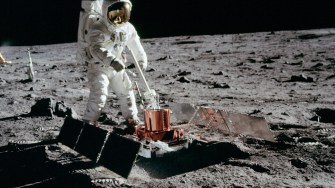 Buzz Aldrin deploys a seismometer during the Apollo 11 mission.

To gain a fuller understanding of their origin, a team of scientists led by Thomas Watters, senior scientist in the Center for Earth and Planetary Studies at the Smithsonian’s National Air and Space Museum took a closer look at data from four seismometers left on the moon by the Apollo 12, 14, 15 and 16 missions at their landing sites. While the Apollo 11 device was active only for about three weeks, the others recorded 28 shallow moonquakes from 1969 to 1977, and there’s no reason to think the quakes have stopped since then.

Watters’ team developed an algorithm for identifying the quake epicenters from the seismometers’ data, and found that at least eight of them were within 30 kilometers of a visible scarps, lending support to the idea that movement of those scarps created the moonquakes. “We think it’s very likely that these eight quakes were produced by faults slipping as stress built up when the lunar crust was compressed by global contraction and tidal forces,” Watters summarizes, “indicating that the Apollo seismometers recorded the shrinking moon and the moon is still tectonically active.” These were not all subtle temblors, either. “Some of these quakes can be fairly strong, around five on the Richter scale.”

The algorithm also revealed that six of the eight quakes occurred when the Earth’s tidal pull on the Moon was at its maximum, when the moon was at its farthest point, or apogee, from Earth. It’s likely that at these times the Moon’s crust is under exceptional stress, and so it’s more likely for fault slips to occur.

An interesting sidetone is that China’s Chang’e-4 dark-side lunar mission may have just found bits of mantle rock on the moon’s surface, perhaps a sign of continued geological movement of the Moon’s crust and mantle.

As LRO Project Scientist John Keller of NASA’s Goddard Space Flight Center in Maryland points out, “It’s really remarkable to see how data from nearly 50 years ago and from the LRO mission has been combined to advance our understanding of the moon, while suggesting where future missions intent on studying the Moon’s interior processes should go.”

This short story is a fictional account of two very real people — Anaximander and Anaximenes, two ancient Greeks who tried to make sense of the universe.
Life

Water is vital for life. Luckily for spacefaring humans, the solar system is full of it.
Up Next
Strange Maps

Why the south of Westeros is the north of Ireland

As Game of Thrones ends, a revealing resolution to its perplexing geography.