NASA’s Lunar Reconnaissance Orbiter (LRO) has been orbiting the Moon about a dozen times per day since 2009. The craft carries six high-tech instruments that have helped scientists create detailed maps of the moon, and learn more radiation and temperatures on the lunar surface.

But the craft also carries a rather simple instrument: a reflector the size of a paperback novel.

Over the past decade, scientists have been shooting laser beams from Earth to the LRO’s reflector, some 240,000 miles away, hoping to catch a return signal. On Monday, NASA scientists and their French colleagues announced that they successfully received that return signal for the first time.

What can scientists learn by bouncing lasers off the LRO? For one, it reveals precisely how many seconds it takes for photons to travel there and back — an average of 2.5 seconds. Scientists can use this duration to tell exactly how far away an object is. Also, by measuring tiny fluctuations in the duration, they can study subtle movements of the Moon. 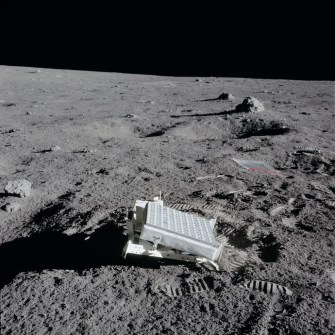 A close-up photograph of the laser reflecting panel deployed by Apollo 14 astronauts on the Moon in 1971.NASA

The technology isn’t quite new. During the Apollo era, astronauts installed on the lunar surface five reflecting panels, each containing at least 100 mirrors that reflect back to whichever direction it’s coming from. By bouncing light off these panels, scientists have been able to learn, for example, that the Moon is drifting away from Earth at a rate of about 1.5 inches per year.

“Now that we’ve been collecting data for 50 years, we can see trends that we wouldn’t have been able to see otherwise,” Erwan Mazarico, a planetary scientist from NASA’s Goddard Space Flight Center in Greenbelt, Maryland, said. “Laser-ranging science is a long game.” 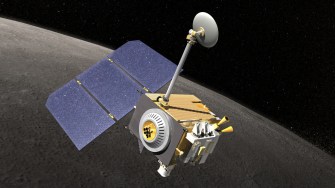 But the long game poses a problem: Over time, the panels on the Moon have become less efficient at bouncing light back to Earth. Some scientists suspect it’s because dust, kicked up by micrometeorites, has settled on the surface of the panels, causing them to overheat. And if that’s the case, scientists need to know for sure.

That’s where the recent LRO laser experiment comes in. If scientists find discrepancies between the data sent back by the LRO reflector and those on the lunar surface, it could reveal what’s causing the lunar reflectors to become less efficient. They could then account for these discrepancies in their models.

More precise laser experiments could also help scientists learn more about the moon’s core. By measuring tiny wobbles as the Moon rotates, past laser experiments revealed that the satellite has a fluid core. But inside of that fluid could lie a solid core — one that might’ve helped to generate the Moon’s now-extinct magnetic field.

However, confirming that hypothesis will require more precise measurements — and the continued success of laser experiments involving the LRO, or reflecting panels installed on the Moon during future missions.

“The precision of this one measurement has the potential to refine our understanding of gravity and the evolution of the solar system,” Xiaoli Sun, a Goddard planetary scientist who helped design LRO’s reflector, told NASA.

Why your hair dulls the sharpest razor blades

Ever wonder how soft hair can dull a steel razor? So did scientists at MIT.