Are you an engineer, designer, manufacturer, or STEM student? Maybe just someone with a healthy predilection for bucket drums? Then NASA wants to hear from you.

NASA’s Lunar Surface Innovation Initiative (LSII) is sponsoring a challenge hosted by GrabCAD to garner ideas for a bucket drum system to be equipped on the Regolith Advanced Surface Systems Operations Robot (RASSOR) excavator. LSII is a technology development portfolio aimed at empowering human-robotic exploration of the Moon and, one day, Mars. 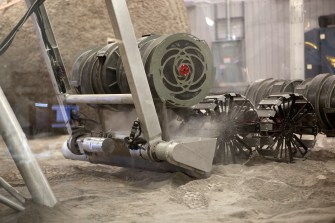 RASSOR 2.0 being tested along with the MARCO POLO/Mars Pathfinder, an ISRU propellant production technology, at the Kennedy Space Center, Florida.

Designing on the RASSOR’s edge

The RASSOR excavator—a “tele-operated mobile robotic platform”—is being iterated at NASA Kennedy Space Center. Its current 2.0 design looks like it was built with a life-size K’NEX set. Four giant tread wheels surround the main platform, which has two arms coming out from either side.

At the end of each arm is a giant bucket drum with hollow cylinders for scoping up regolith, the layer of rocky material that covers bedrock. As the bucket drums on each arm counter-rotate, baffles within trap the regolith to prevent it from falling out as the excavator roams. When RASSOR reaches its deposit site, the drums reverse direction to spill their contents.

NASA’s challenge for participants is to design a better shape for the RASSOR’s bucket drums and interior baffling. The drums must be able to hold regolith at 50 percent capacity without spillage. That’s easier said than done, and for most people, it likely didn’t sound that easy in the first.

“With RASSOR, we’re no longer relying on the traction or the weight of the robot,” Jason Schuler, a robotics engineer in the Exploration Research and Technology Programs at Kennedy Space Center, told CNN. “RASSOR is excavation and transportation all in one, but we’d like to improve the design.

The reason the RASSOR can’t rely on traction or weight has to do with the Moon’s weaker gravity. On Earth, an excavator’s weight and traction can be used to overcome soil’s resistive force. The Moon’s gravity is only 17 percent that of Earth’s, so the RASSOR cannot rely on reaction force to penetrate the regolith, especially at depths with high density. For this reason, it must incorporate near “net-zero reaction force.”

The RASSOR must also be much lighter than a typical excavator while maintaining the durability and reliability required to work in such an extreme environment. With space transportation costs at about $4,000 a pound, any pound shed or square foot condensed from the design equals thousands of dollars saved.

Another trip to the Moon

The RASSOR will be part of NASA’s Artemis program. Through Artemis, NASA hopes to put the first woman and thirteenth man on the Moon—the first people to revisit to the lunar surface in more than 40 years. Once there, the goal is to establish sustained Moon exploration by 2028, a proving ground for the technology that may one day send astronauts to Mars.

RASSOR will travel to the Moon as a precursor to human moonflight. Coupled with a lander sporting a processing plant, the robot excavator will journey onto the Moon’s surface to excavate regolith. It will deposit that regolith at the lander for processing.

Regolith can be processed into valuable resources such as water, propellant, and breathable air. It also contains metals that could be used to craft structures for the astronaut’s labs and habitats.

NASA is working toward launching Artemis 1—an uncrewed flight to test the Orion spacecraft—later this year, but had to suspend work on the rocket due to the COVID-19 threat.

The GrabCAD challenge has a prize pool totaling $7,000. The first-place proposal will be awarded $3,000, with monetary prizes offered for second to fifth place. There is also the satisfaction and bragging rights of knowing your design will make sustained Moon exploration a reality.

And if you have a friend at the same longitude, you can even measure its circumference.This year’s equinox, on March 19/20 of 2020 (longitude-dependent), is Earth’s earliest in 124 years.Even […]