Dark matter is famously supposed to take up 27% of the existing mass-energy of the universe. Dark energy eats up another 68%, while ordinary matter and energy that includes us accounts for just about 5%, scientists estimate. But if so much of everything is taken up by dark matter and dark energy, where are they? Neither has been conclusively detected, but a new study proposes a fresh way to spot dark matter signatures, looking in data we already gathered.

The study, led by researchers from the Lawrence Berkeley National Laboratory and UC Berkeley, found that it may be possible to detect dark matter signals during scattering. This process occurs when dark matter particles collide with atomic nuclei, producing small flashes of light and other potentially noticeable indicators. The scientists think they can pinpoint such moments and capture dark matter by looking for ejected electrons, neutrinos or other signs.

The study suggests that some currently existing experiments can be adapted to search for these kind of signals that relate to how the dark matter energy is absorbed.

The scientists also propose they can look through particle detector data that’s already been gathered to find dark matter characteristics.

The study’s lead author, postdoctoral researcher Jeff Dror from Berkeley Lab’s Theory Group and UC Berkeley’s Berkeley Center for Theoretical Physics, explained that “You can make a huge amount of progress with very little cost if you step back a little bit in the way we’ve been thinking about dark matter.” 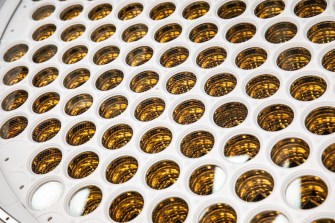 The researchers hope their approach can lead to new avenues in the search for the elusive dark matter. One plan is to focus on discovering light fermions, which may be related to the so-called “sterile neutrinos” – another theorized particle.

Most conducive to re-adapting, according to the scientists, would be existing experiments involving large, highly-sensitive detector materials with low background “noise” or interference. One such contraption could be the ultra sensitive UX-ZEPLIN (LZ), a dark matter search project currently under construction in a former South Dakota mine.

Another possibility is try the new method with the data from the Enriched Xenon Observatory (EXO), an underground experiment that already cooperated with the researchers.​

“The data is already basically sitting there. It’s just a matter of looking at it,” Dror stated.

Dror thinks finding out what dark matter is made of would be within future reach. “For me, that’s a huge motivation to keep pushing—there is new physics out there,” he added.

The study’s co-authors included the UC Berkeley graduate student Robert McGehee, and Gilly Elor of the University of Washington.

The biggest nuclear blast in history came courtesy of Tsar Bomba. We could make something at least 100 times more powerful.
Videos

Do aliens dream about meeting us, too?
▸
with
Jill Tarter
Up Next
The Present

Now, more than ever, student-focused education is critical

The coronavirus pandemic is highlighting the innovations that have been desperately needed in higher education all along.