In a meteorite NASA retrieved from the LaPaz icefield in Antarctica, researchers have uncovered a grain of stardust that formed before even our own sun had come into existence. What’s more, this grain of material sheds insight into how solar systems like our own form.

“Sometimes research is about satisfying your curiosity. One of the greatest curiosities is how the universe was formed and how life started,” said Jane Howe, one of the researchers on this project. “And this weirdo particle showed us something we didn’t know before.”

How a white dwarf made ‘this weirdo particle’

In a sense, everything is composed of the same stardust that was found in this meteorite in Antarctica — all matter comes from either the Big Bang or stars, in one way or another. But it’s rare to find matter that originated directly from the source. Specifically, the grain from the LaPaz meteorite, called LAP-149, is believed to have come directly from a white dwarf nova.

There’s no fusion going on in a white dwarf, so they typically aren’t making new stuff in the universe. White dwarfs are the remnants of a certain old stars that have burned through their fuel, and their cold, white glow is just the leftover energy from the old star’s fusion reactions. When a white dwarf orbits another star in a binary system, however, that white dwarf can suck up material from its larger companion star. Once a white dwarf accumulates enough material from its companion star, the matter can periodically reach temperatures high enough to trigger fusion again in a violent explosion.

Most of us are familiar with supernova; this is a similar event, though less violent. When a white dwarf goes nova, it shoots out clouds of stardust composed of different elements that can eventually condense and find their way to Earth. This is what happened with LAP-149, which found its way to Antarctica. 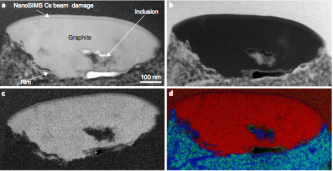 The secrets gleaned from LAP-149’s composition

How did the researchers know that LAP-149 truly came from outside the solar system? When analyzing the material, they found that the grain was highly enriched in the carbon isotope 13C, far beyond what one would expect for anything that was formed within the solar system. “The carbon isotopic compositions in anything we have ever sampled that came from any planet or body in our solar system varies typically by a factor on the order of 50,” said lead author Pierre Haenecour in a University of Arizona press release. “The 13C we found in LAP-149 is enriched more than 50,000-fold. These results provide further laboratory evidence that both carbon- and oxygen-rich grains from novae contributed to the building blocks of our solar system.”

Because LAP-149 was extrasolar in origin, the researchers could study its composition and gain insights into the processes from its source, a white dwarf nova. Using ion and electron microscopy, the research team found a small inclusion, just a few hundred nanometers in size, consisting of oxygen-rich silicates within the larger graphite structure. This turned out to be a very exciting find — there have been no other grains of stardust found that match this composition.

The material in a nova depends on the composition and density of the white dwarf star that produced it, and traditional models of the thermodynamics of such novae did not correspond with what was found in LAP-149. Because oxygen-rich silicates were found within LAP-149’s graphite, this work enables scientists to further refine their understanding of the thermodynamic processes that go on in novae, specifically how grains of stardust form and move. It also shows that carbonaceous and silicate dust can be produced in the same ejection from a nova, ultimately providing insight into how solar systems such as ours were formed.

Taking a broader view, however, this work serves as an incredible example of how far science has come. Not only could we identify that a meteorite was formed from the clouds of stardust surrounding a white dwarf star undergoing a violent, explosive, and creative process billions of years ago, we were able to study its composition and learn something about how that process unfolded. Through research such as Howe, Haenecour, and colleagues’, we’ll be able to learn even more about the cosmos in the future.

Dr. Sara Walker is an astrobiologist and theoretical physicist, who is questioning the very nature of life and how we’re attempting to find it elsewhere.
▸
6 min
—
with
Sara Walker
Up Next
Communication

Use humor to enchant your audience, with John Cleese

You can practically see them slipping away. Yes, they’re still in the conversation with you, at least physically, but you know: The other person has disengaged. Who knows where their […]