Life as we know it requires liquid water. For this reason, it is widely assumed that any extraterrestrial life would also require access to the stuff. Even if we end up being alone in the universe or at least in our corner of it, knowing the location of water is important if we ever decide to venture far away from our planet.

Luckily, finding water is something that humans are very good at. Modern science lets astronomers do it across vast distances and under obstacles as varied as opaque clouds and miles of ice. Here are seven locales in the solar system with liquid water.

Though the notion that Mars is home to vast canals filled with enough water to sustain lush vegetation has been debunked since the 1920s, Mars does have as much water as Lake Superior. The overwhelming majority of it is frozen in its polar ice caps, and trace amounts of it can be found in the atmosphere.

Liquid water only exists in small lakes below the glaciers at the poles. Identified via radar, the lake is 1.5 km below the ice cap and is thought to be kept liquid by the anti-freezing properties of some of the minerals in the Martian soil.

One of the Galilean moons of Jupiter, Europa, is well known for its surface of solid ice and subsurface, moon-spanning oceans. The icy crust on the planet is estimated to be anywhere from a few thousand meters to 30 km thick. The ocean below that is estimated to be 100 km deep, with some of it possibly a slushy mixture near the top and mostly liquid below that. If correct, this would mean that Europa has more water on it than exists in all of Earth’s oceans nearly three times over.

These vast oceans, kept warm by Europa’s volcanic core and the effects of tidal forces on the moon from Jupiter, are thought to be a possible habitat for extraterrestrial life. Vents, similar to hydrothermal vents on Earth, could provide the energy and conditions for life in an environment that never even glimpses the sun.

Ganymede is another Galilean moon of Jupiter and the ninth largest object in the solar system — bigger than both Mercury and Pluto. It is known for being the only moon in the solar system with amagnetic field, which helped indicate that it has a massive ocean under its icy surface.

By watching the motion of the magnetic field of the moon, caused in part by its interactions with Jupiter, astronomers noted subtle changes that indicated the existence of a large saltwaterocean. This ocean is estimated to lie under a 150-km thick crust of ice and to be up to 100 km deep. Like Europa, it also could have more water in it than all of Earth’s oceans.

More recent observations have confirmed the existence of water vapor in the moon’s thin atmosphere, likely caused by sublimation from the water ice on thesurface. 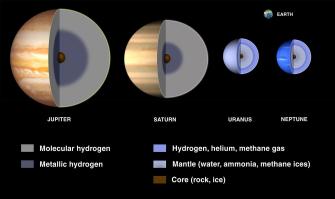 Uranus and Neptune are known as “ice giants” because they are composed primarily of elements heavier than hydrogen and helium gas combined with a large amount of water, ammonia, and methane ice.

Unlike the gas giants Jupiter and Saturn, which rely on gas to provide 85 percent of their mass, the ice giants are both believed to have oceans of supercritical water — that is, water at a temperature and pressure above its so-called critical point, in which liquids and gases become indistinguishable. This supercritical water constitutes two-thirds of their totalmass.

Ice giants are thought to be common around other stars. Exactly how they form is still unknown, but a future mission to find out is beingdiscussed.

The largest and most interesting moon of Saturn, Titan, is a strange place.

The second largest moon in the solar system (after Ganymede), Titan is characterized by an atmosphere of nitrogen and so much liquid methane that a “methane cycle” not unlike the water cycle on Earth exists — complete with rain, lakes, rivers, and seas of the stuff at the chilly temperature of -179° C (−290° F).

However, even here there is water. Water ice is thought to lie below the rocky surface, and liquid water mixed with enough ammonia to keep it from freezing is thought to lie below the surface as well. This was determined by the Cassini probe, which examined tidal forces on the moon. Astrophysicists believe the forces are strong enough to implicate a subsurfaceocean, which is quite likely composed of water.

How did the troughs form?