Seven years ago, a 600-mile wide space hurricane made of plasma raged for eight hours high over the North Magnetic Pole. Only now has an international team of scientists been able to describe the phenomenon and report on it in Nature Communications.

Many objects in space, like Earth, the Sun, most of the planets, and even some large moons, have magnetic fields. The area around an object that is affected by a magnetic field is known as the magnetosphere.

For us Earthlings, the magnetosphere is what protects us from the most intense cosmic radiation and keeps the solar wind from affecting our atmosphere. When charged particles interact with it, we see auroras. Its fluctuations lead to changes in what is known as “space weather,” which can impact electronics. 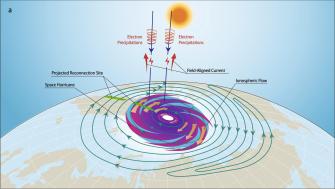 This “space hurricane,” as the scientists are calling it, was formed by the interactions between Earth’s magnetosphere and the interplanetary magnetic field, the part of the Sun’s magnetosphere that goes out into the solar system. It took on the familiar shape of a cyclone as it followed magnetic fields. For example, the study’s authors note that the numerous arms traced out the “footprints of the reconnected magnetic field lines.” It rotated counter-clockwise with a speed of nearly 7,000 feet per second. The eye, of course, was still and calm.

The storm, which was invisible to the naked eye, rained electrons and shifted energy from space into the ionosphere. It seems as though such a thing can only form under calm situations when large amounts of energy are moving between the solar wind and the upper atmosphere. These conditions were modeled by the scientists using 3D imaging.

Study co-author Larry Lyons of UCLA explained the process of putting the data together to form the models to NBC: “We had various instruments measuring various things at different times, so it wasn’t like we took a big picture and could see it. The really fun thing about this type of work is that we had to piece together bits of information and put together the whole picture.”

Lyons further mentioned that these findings were completely unexpected and that nobody had even theorized a space hurricane could exist. 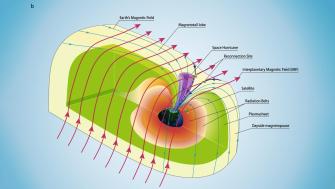 While this storm wasn’t a threat to any life on Earth, a storm like this could have noticeable effects on space weather. This study suggests that there could be several effects, including “increased satellite drag, disturbances in High Frequency (HF) radio communications, and increased errors in over-the-horizon radar location, satellite navigation, and communication systems.”

The authors speculate that space hurricanes could also exist in the magnetospheres of other planets.

Lead author Professor Qing-He Zhang of Shandong University discussed how these findings will influence our understanding of the magnetosphere and its changes with EurekaAlert, saying, “This study suggests that there are still existing local intense geomagnetic disturbance and energy depositions which is comparable to that during super storms. This will update our understanding of the solar wind-magnetosphere-ionosphere coupling process under extremely quiet geomagnetic conditions.”

Researchers unearth the “Lamborghini” of ancient chariots in Pompeii

The chariot survived ancient eruptions and modern-day looters to become a part of the world heritage site.