As humankind branched off from other primates, there were a few key thresholds we crossed. One of these was our switch to walking upright, and there are numerous theories regarding what might have compelled us to do so. A new paper just published in the Journal of Geology puts forth a new idea: A pair of supernovae ionized our atmosphere to such an extend that lightning became exceptionally common, and burned down the trees in which our ancestors lived.

The paper’s lead author, physicist and astronomer Adrian Melott of the University of Kansas, says, “It is thought there was already some tendency for hominins to walk on two legs, even before this event. But they were mainly adapted for climbing around in trees. After this conversion to savanna, they would much more often have to walk from one tree to another across the grassland, and so they become better at walking upright. They could see over the tops of grass and watch for predators. It’s thought this conversion to savanna contributed to bipedalism as it became more and more dominant in human ancestors.” 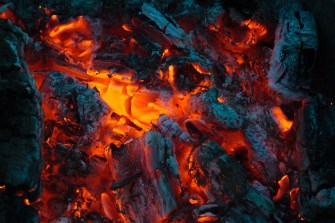 In 2016, Melott authored a paper that documented the incongruous presence of iron-60 isotopes in ancient seabed deposits and postulated that they came from supernovae about 325 light years distant. That same year, research from a team led by astrophysicist Dieter Breitschwerdt got more specific: It was precisely two such events, one supernova 1.7 to 3.2 million years back, and the other one 6.5 to 8.7 million years ago.

At the time, Melott noted, “Our local research group is working on figuring out what the effects were likely to have been. We really don’t know. The events weren’t close enough to cause a big mass extinction or severe effects, but not so far away that we can ignore them either. We’re trying to decide if we should expect to have seen any effects on the ground on the Earth.”

Then there’s the unexplained high levels of charcoal and soot that appear in the geologic layer a few million years back. Melott asserts that this may indicate an unusual amount of global forest-burning. “It’s all over the place,” says Melott, “and nobody has any explanation for why it would have happened all over the world in different climate zones.” 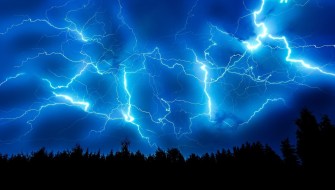 Putting these two mysteries together, Melott explains how the supernovae could have led to humanity’s arboreal habitat being reduced to cinders.

“We calculated the ionization of the atmosphere from cosmic rays which would come from a supernova about as far away as the iron-60 deposits indicate,” says Melott. The more recent of the two appears to have hit the Earth harder. “We contend it would increase the ionization of the lower atmosphere by 50-fold. Usually, you don’t get lower-atmosphere ionization because cosmic rays don’t penetrate that far, but the more energetic ones from supernovae come right down to the surface — so there would be a lot of electrons being knocked out of the atmosphere.”

This would affect the bottom mile of our atmosphere in an exceptional way: “When high-energy cosmic rays hit atoms and molecules in the atmosphere, they knock electrons out of them — so these electrons are running around loose instead of bound to atoms.” Melott says that this abundance of available electrons would have made it far easier for lightning bolts to form, increasing the likelihood of forest fires. The timing’s about right geologically. 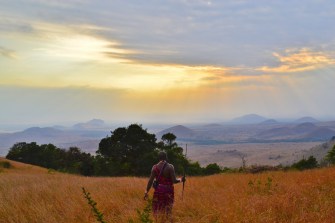 Though some of our ancestors are thought to have begun experimenting with walking upright prior to the time at which the lightning would have occurred, they were still primarily living among the trees.

However, says Melott, the “increase in fires is thought to have stimulated the transition from woodland to savanna in a lot of places — where you had forests, now you had mostly open grassland with shrubby things here and there.”

He adds that this new theory fits with northeast African human evolution,”Specifically, in the Great Rift Valley where you get all these hominin fossils.”

If we are wreaking havoc on ourselves and the world, it is because we have become mesmerized by a mechanistic, reductionist way of thinking.
Life

About 150 million years ago, a long-necked sauropod came down with a respiratory infection. The rest is history…or is it?
Hard Science

The big-picture physics is simple – let gravity do its job.
Starts With A Bang

Mathematically, it is a monster, but we can understand it in plain English.
Up Next
Lifelong Learning

“Self-talk has been the biggest thing in my life,” says former Navy SEAL David Goggins. He knows he’s not alone. He also knows it’s largely, to use his words, “a […]