Schrodinger’s cat is one of the most famous thought experiments in all of science. It’s the source of countless jokes, t-shirts, and pseudo-intellectual conversations. The idea is this: if a cat is put into a box with an elaborate quantum booby trap then when we open the box the trap will either be activated and kill the cat or not be activated at all. Quantum Physics says the cat should be in “superposition” while we are not looking at it, just like the rest of the quantum system. Meaning the cat is both alive and dead at the same time until we look at it! Zombie cat!

Incredible! Except, Schrodinger didn’t mean that at all.

Erwin Schrodinger, quantum physicist extraordinaire, devised the thought experiment as a way to show how the Copenhagen Interpretation of quantum mechanics, the mainstream one, must be wrong. Pointing out that we cannot think of a cat as both alive and dead at the same time, but if the interpretation tells us this is the case, then it must be incorrect.

Albert Einstein, who was never completely comfortable with much of quantum mechanics, also agreed, writing to Erwin: “You are the only contemporary physicist, besides Laue, who sees that one cannot get around the assumption of reality, if only one is honest. Most of them simply do not see what sort of risky game they are playing with reality—reality as something independent of what is experimentally established. Their interpretation is, however, refuted most elegantly by your system of radioactive atom + amplifier + charge of gunpowder + cat in a box, in which the psi-function of the system contains both the cat alive and blown to bits. Nobody really doubts that the presence or absence of the cat is something independent of the act of observation.”

Schrodinger later tried for a purely wave based understanding of quantum mechanics, but it was never as popular nor successful as the Copenhagen understanding, which is still dominant today. Of course, there are other ways to look at it, here are a few, and what happens to the poor cat in each one. There are many more interpretations than just these, but these are the most popular alternatives. 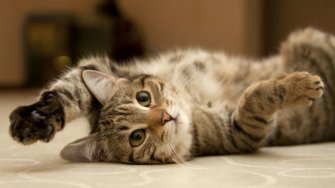 A happy cat, not in quantum superposition or a box with a trap in it.

MANY WORLDS: The idea of the multiverse is known to many people. In this interpretation, the cat is alive in one universe and dead in another one. The new universe was “created” when the cat is observed, there is no being alive and dead for this cat. This model of the universe is seen in Bioshock Infinite, and Rick and Morty; among other popular works.

OBJECTIVE COLLAPSE: These theories suggest that the system would collapse long before you open the box, either with the passage of enough time or some other simple event. Therefore, the cat is in a definite state of alive or dead long before you look. This does, however, leave open the idea that the cat is both for at least a fraction of a moment, it just doesn’t stay that way long.

All this is great in theory, has anybody tried an experiment?Yes, but not on a cat. Objects that are rather large, for these purposes, have been placed in superposition. These states don’t seem to last long, however. We aren’t even to the point of having bacteria be in a “cat state” yet. It seems like no experiment has been done, or will be done for some time.

Schrodinger’s cat is one of the best known thought experiments in science. One that most people know, but few understand. While it was intended to be a simple critique, it has evolved into a key test for judging how an understanding of quantum mechanics works, and if that interpretation is a viable one. Is the cat alive? Is it dead? Is it both? How can we know? How is this possible? A quote from Richard Feynman comes to mind:

“Do not keep saying to yourself, if you can possibly avoid it, “But how can it be like that?” because you will get “down the drain”, into a blind alley from which nobody has yet escaped. Nobody knows how it can be like that.”

This is still a subject of great debate, both for physics and philosophy. Perhaps a new interpretation will be proposed which finally lays the cat to rest, or lets it live outside of the box, or both.

Perfectionism is on the rise, and its consequences for mental health can be devastating. The Japanese philosophy of “wabi sabi” can help.
Up Next
Surprising Science

Harvard researchers have found the source of human consciousness

Classical neurology defines consciousness as the ongoing process of arousal and awareness.