A fascination with dinosaurs typically starts young. If an adult needs a question answered, a little kid is often the best, most enthusiastic, and up-to-date resource. Going on a paleontology dig is certainly one of the cooler, fascinating ways for a teen to spend a summer.

It’s even better when he or she gets the thrill of gently prying from the dirt something that’s been never seen before, which is what happened in 1998 when a 16-year-old high-school junior named Sterling Nesbitt found the remains of an unknown creature at Zuni Basin dinosaur site, which straddles the New Mexico-Arizona border. A year earlier geologist Robert Denton had found a partial, tiny skull of the same mysterious theropod, but Nesbitt’s find was a more complete specimen.

This month, that creature has finally been scientifically identified: It’s a tiny tyrannosaurid — dubbed Suskityrannus hazelae — and its remains offer an unprecedented view of what the mighty T-Rex was like before it became the killing behemoth kids know and love. Indeed, according to the researchers, the dino is phylogenetically the “intermediate between the oldest, smallest tyrannosauroids and the gigantic, last-surviving tyrannosaurids.” 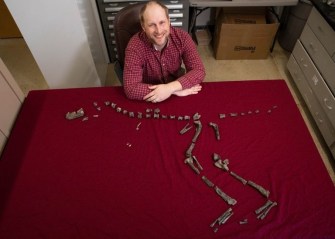 A partial Suskityrannus skull is dwarfed by just the jawbone of a T-Rex. Image source: Virginia Tech News

When Nesbitt originally found the bones, they were among the remains of other prehistoric fish, turtles, lizards, crocodylians, and mammals. Because of this, for a time, the assumption was that he’d found a dromaeosaur (think Velociraptor). “Essentially, we didn’t know we had a cousin of Tyrannosaurus rex for many years,” Nesbitt says, regarding the new taxonomy.

While a typical Tyrannosaus rex crushed the scales at about nine tons, the Suskityrannus weighed in at a mere 45 and 90 lbs. It stood just three fee tall at the hip, and was about nine feet long. The specimen found by Nesbitt is believed to date back to the Cretaceous, about 92 million years ago, and is thought to have been at least three years old. Like its larger cousin, it was also a meat-eater, though it likely supped on much smaller prey than did T-Rex.

Nesbitt tells Virginia Tech News, “Suskityrannus gives us a glimpse into the evolution of tyrannosaurs just before they take over the planet.” He adds, “It also belongs to a dinosaurian fauna that just precedes the iconic dinosaurian faunas in the latest Cretaceous that include some of the most famous dinosaurs, such as the Triceratops, predators like Tyrannosaurus rex, and duckbill dinosaurs like Edmotosaurus.”

“Suskityrannus has a much more slender skull and foot than its later and larger cousins, the Tyrannosaurus rex,” Nesbitt reports. A partial claw has been found, and though it’s unclear how many fingers Suskityrannus had, yes, they’re just as oddly small as those of T-Rex.

The animal’s new name comes from the Zuni word for coyote, “Suski” — the Zuni Tribal Council granted permission to appropriate the term. The “hazelae” is a tribute to Hazel Wolfe, who discovered the Zuni Basin site in 1996, and whose support has been crucial to the ongoing Zuni Basin Paleontology Project. 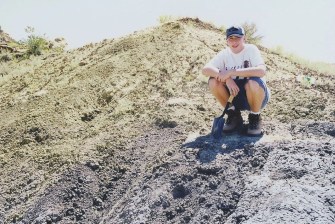 Nesbitt at the 1998 dig. Until 2006, his discovery was housed at the Arizona Museum of Natural History. Image source: Hazel Wolfe / Virginia Tech News

What became of discoverers? Denton is now an engineering geologist at GeoConcepts Engineering, and Nesbitt is now a geoscientist at Virginia Tech.

“My discovery of a partial skeleton of Suskityrannus put me onto a scientific journey that has framed my career. I am now an assistant professor that gets to teach about Earth history,” says Nesbitt.

Nesbitt eventually took possession of his find and carted it around with him as he moved between academic jobs until it was finally identified.

Some animals were even assigned their own lawyers.
Up Next
Hard Science

Researchers successfully sent a simulated elementary particle back in time

Don’t start investing in flux capacitors just yet, though.