Whenever I go over my sister’s house, her beagle Taylor runs and jumps all over me. The dog then races around the room, barking and howling. If I sit on the couch she leaps onto my lap and licks my face (I’d better cover my groin, I’ve learned. One misstep can be painful). It doesn’t matter if my last visit was just yesterday or last year. This is how she is: a non-stop lovefest.

It’s often this unending outpouring of enthusiasm, loyalty, and love that draw dog owners to their beloved pets. It’s an old symbiosis, stretching back as far as 32,000 years ago. That long a relationship pays off in certain ways. There’s a deep sense of mutual understanding. Recent studies have shown that dogs actually recognize words that we say and the facial expressions we make, be they happy or angry faces.

Conversely, previous work with wolves, even when raised by humans, shows that they don’t become as close to their owners nor as sociable as dogs do. So what makes dogs so friendly and so in tune with us? Some scientists point to genetic underpinnings. New research published in the journal Science Advances, lends weight to this argument. Here, researchers attempted to identify the genes behind what they call hyper-sociability. 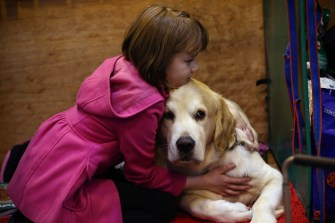 Studies have shown that dogs can read our emotions and facial expressions. Getty Images.

Biologist Bridgett vonHoldt of Princeton and her colleagues conducted the study. VonHoldt has been examining canine DNA for most of her career. In a previous project, she elucidated the genetic differences between wolves and dogs, identifying some 48,000 mutations that dogs had and wolves didn’t.

On this project, VonHoldt teamed up with Monique Udell at Oregon State University, who’s been studying dog and human relationships, including how they bond and interact. Udell had also collected a number of blood samples from domesticated dogs and wolves. Researchers started out examining the behavior of 10 wolves and 18 dogs raised side-by-side, by humans.

They had been evaluated over the years on different socializing metrics, such as whether or not they approached humans, if they interacted with strangers positively, and how much attention they paid to humans overall. When it came to hyper-sociability, dogs outscored wolves by a significant margin every time. Why was that?

VonHoldt and colleagues looked at the genomes of these animals and compared them. They identified a segment of 28 genes that were way different in dogs than their wolf cousins. These genes are responsible for the canine iteration of what’s known in us Williams Syndrome, which causes overwhelming friendliness and affability. 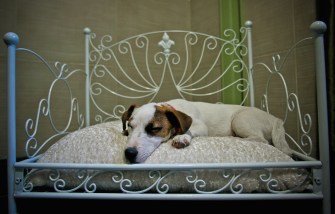 Hyper-sociability has had its advantages for dogs, no doubt. Getty Images.

Researchers identified four genes were responsible for hyper-sociability in dogs. Two of them, GTF2I and GTF2IRD1 were recognized as drivers of this trait in other species. In mice, GTF2I causes a high level of sociability. It’s been implicated in Williams Syndrome as well.

Another issue is how dogs became domesticated exactly, which is a source of great debate. Non-domesticated wolves and coyotes were also tested by the team for genes associated with hyper-sociability. Turns out coyotes don’t have them, while both dogs and wolves do, and in dogs of course, they’re highly expressed.

The study has its limitations, the biggest being the small sample size. Still, other teams are likely to corroborate these findings. In the meantime, VonHoldt has moved on to the next stage, studying these genetic mutations carefully, to see what molecular processes are behind their expression. With humans, certain genes suppress other “core genes,” leading to Williams Syndrome. VonHoldt wants to know if a similar process takes place in dogs.

In the long view, dogs’ friendliness toward us has served them in the realms of survival and evolution, what Brian Hare of Duke University calls the “self-domestication hypothesis” or “the survival of the friendliest.” It makes you wonder if we look at Williams Syndrome all wrong, as a disorder, when gregariousness may actually be the glue that keeps society together. Such humans may be considered as invaluable to society as the family dog is to the household.

Dogs know when people are lying

A new study tested to what extent dogs can sense human deception.
Neuropsych

Brain cells snap strands of DNA in many more places and cell types than researchers previously thought.
Up Next
Technology & Innovation

The First Successful Full-System Test of a Hyperloop Just Happened