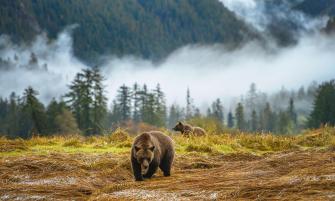 Gathering the samples was made possible thanks to a “bear working group,” a collaboration between the First Nations that began in 2011 — they, too, were curious about the bears’ family ties. The lead author of the study, Lauren Henson, worked together with representatives of the Gitga’at, Haíɫzaqv (Heiltsuk), Wuikinuxv, Nuxalk, and Kitasoo/Xai’xais Nations. Other co-authors include researchers from the University of Victoria.

Having already been collecting grizzly hairs for DNA analysis for 11 years, 147 samples in all were analyzed, taken from an area about the size of Vermont (23,500 square kilometers).

To procure samples, the researchers gathered piles of leaves and sticks coated with dogfish oil or a fishy slurry. Henson tellsScience, it “smells really, really terrible to us, but is intriguing to bears.” Each pile was surrounded by barbed wire on which tufts of grizzly fur got snagged as the bears came to investigate the smell. Researchers distributed lures throughout the study area, sometimes in places so remote that they could be reached only by helicopter. 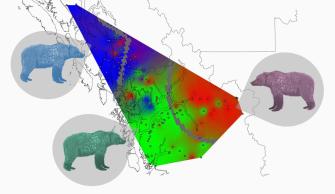 The ranges of the three grizzly groups.Credit: Raincoast Conservation Foundation

The scientists were puzzled by the separation maintained between the three DNA groups in spite of no obvious physical barriers between them. Maybe, they wondered, it isn’t so much that the bears cannot travel to new locations but rather that they have no need to.

When the researchers realized how closely the group’s ranges aligned with the areas in which the Tsimshian, Northern Wakashan, and Salishan Nuxalk language families are spoken, this hypothesis made even more sense. After all, the same resources that sustain human populations are the same as those required for large mammals such as grizzlies. Those resources include land, fresh water, and food, especially salmon in this area.

The Raincoast Conservation Foundation’s press release sums it up: “The explanation the research partnership favors is that the landscape has shaped bears and humans in similar ways.”

The researchers have not, however, figured out if there are differences between the resources available in the three areas. As the Foundation writes, “However, we do know that bears and people have shared resources and space on this landscape for millennia, emphasizing the potential for a parallel response to variation in these resources that reflects this long-term relationship.”

The close relationship between people and these grizzly groups supports the need for local knowledge in land management, says the Foundation’s William Housty, a co-author of the paper. “Our investments in research across our territories allow us to make informed management decisions that draw not only from our own knowledge, but also new scientific evidence like this.”

The spikes in their mouths would have helped them catch squid or fish.
Up Next
The Present

We have hit “peak car”

People are driving less. This trend is expected to continue.