Electrical brain stimulation has been shown to boost memory and enhance learning. Now, scientists have turned their sights on neurodegenerative diseases. Researchers at Ohio State University’s Wexner Medical Center, found they could delay cognitive decline in Alzheimer’s by using deep brain stimulation. This could allow such patients to be independent for a longer period of time. Their results were published in The Journal of Alzheimer’s Disease.

Instead of trying to improve memory like most Alzheimer’s treatments do, this one focused on preserving cognitive and behavioral functions. Scientists selected three patients and surgically implanted a deep-brain-stimulation (DBS) device inside their brains, near the frontal lobe.

This is where executive function occurs, which includes such things as decision-making, attention, focus, learning, problem-solving, and judgement. Dr. Douglas Scharre was a co-author on this study. He’s the director of the Division of Cognitive Neurology at the university’s Neurological Institute.

We have many memory aides, tools, and pharmaceutical treatments to help Alzheimer’s patients with memory, but we don’t have anything to help with improving their judgments, making good decisions, or increasing their ability to selectively focus attention on the task at hand and avoid distractions. These skills are necessary in performing daily tasks such as making the bed, choosing what to eat and having meaningful socializing with friends and family. 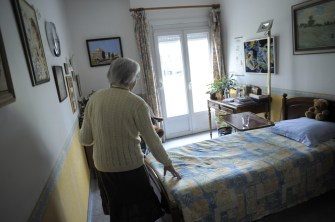 The DBS device operates exactly like a pacemaker, but for the brain. It sends out electrical impulses at specifically calculated intervals. The electrodes implanted in the frontal lobe are attached through very fine wires to a pulse generator underneath the skin of the chest wall. This type of device is usually used to treat Parkinson’s disease. It’s been tried as a therapy for depression and obsessive compulsive disorder (OCD), too.

Researchers aren’t exactly sure how it works. They know it increases coherence between brain regions. But how does it do this? Does it help block out unnecessary signals that cause interference? Or does it instead increase the speed at which neurons communicate?

In this study, what Dr. Scharre and colleagues wanted to know is, if DBS could slow the degeneration of executive function in early stage Alzheimer’s and allow the patient to remain independent for longer. First, three participants were selected. They each had electrodes surgically implanted into a part on their frontal lobe known as the ventral striatum. Then these patients and 100 others who also had Alzheimer’s, were made to take part in a number of different tests which mimicked daily tasks, to see how well they could navigate them. 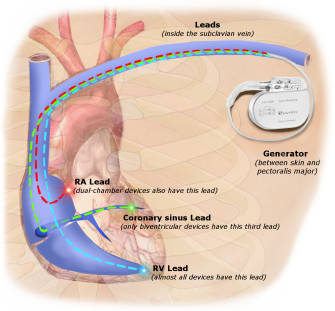 “The Alzheimer’s subjects cognitive and daily functional abilities as a whole declined more slowly than Alzheimer’s patients in a matched comparison group not being treated with DBS,” Dr. Scharre said. “The pilot study found that DBS targeting frontal brain regions can reduce the overall performance decline typically seen in people with mild or early stage Alzheimer’s.” This was a two year study. All subjects implanted with a DBS showed a slowed decline. But for one patient in particular, 85 year-old LaVonne Moore of Delaware, Ohio, the results were more significant.

Today, she can dress herself, make a simple meal, and even decide what she’ll do that day—alternating her plans depending on the weather, tasks impossible for most people with her level of Alzheimer’s. Researchers don’t know how long it’ll last. Her husband, 89 year-old Tom Moore said, “LaVonne has had Alzheimer’s disease longer than anybody I know, and that sounds negative, but it’s really a positive thing because it shows that we’re doing something right.”

Since it was such a small study, the results will have to be repeated. In future research, Dr. Scharre and colleagues plan to try the same technique using non-invasive brain stimulation. We’re in dire need of new treatment options. According to the Alzheimer’s Association, over 5 million Americans are living with the disease today.

That number is expected to balloon to 16 million by 2050. What’s more, it’s a very complicated disease. Truly managing Alzheimer’s may require hitting multiple targets at once, meaning a number of different treatments must be applied in concert. This technique could become an important part of such a strategy.

Four people in the world have a mysterious dementia. Could it hold a key to Alzheimer’s?

Alzheimer’s has proved difficult to treat. But solving the mystery of this ultra-rare frontotemporal dementia may unlock new understanding.
Neuropsych

Study: There are four types of Alzheimer’s disease

New research suggests that there is no “typical” form of Alzheimer’s disease, as the condition can manifest in at least four different ways.
Health

Can scientists find the ‘holy grail’ of Alzheimer’s research?

Clinical trials at the Feinstein Institutes for Medical Research focus on stabilizing cognitive loss and alleviating the psychotic symptoms that change our loved ones.
Neuropsych

Using multiple devices at once is causing your memory to fail, study finds

A Stanford study explores the effect of multitasking on memory in young adults.
Health

This is the damage a tiny speck of space debris can do at 15,000mph

Space is not the place to put waste, as it turns pretty much anything into a high-velocity projectile capable of causing incredible damage.