While there have been many memorable (and quickly forgotten) moments in this election cycle, the NY Timesinterview with Bernie Sanders produced one of the most insightful clues to his character. “I’m not good at backslapping,” he says. “I’m not good at pleasantries. If you have your birthday, I’m not going to call you up to congratulate you, so you’ll love me and you’ll write nice things about me. That’s not what I do. Never have.”

Sanders’s supporters love his curmudgeonly nature as much as his one-pointed agenda focus. Maybe it’s not nature as much as nurture, however. In fact, perhaps he’s just been trying to protect himself from Alzheimer’s disease.

Alright, that’s probably not the reason, but as new research from Switzerland-based institutions, the University of Geneva and the University Hospitals of Geneva, claims, seniors that are a little rough around the edges socially seem to have a protective shield around their memories.

Alzheimer’s is a progressive neurodegenerative disorder. Up to 70 percent of dementia cases are due to this disease. Early onset involves forgetting recent events. As it progresses, victims become irritable, lose motivation, become easily disoriented, and have trouble expressing themselves. Thus far genetics seems to be the driving factor, though head injuries, diabetes, hypertension, and depression have all been implicated.

Researchers have tried to develop a vaccine or medicine to combat it for decades. Alzheimer’s patients display excessive plaque buildup and neurofibrillary tangles in the brain. While there are means for fighting it, including reading, regular exercise, and maintaining a healthy weight, researchers have struggled to identify means for reversing it.

For this study, which will be published in the journal Neurobiology of Aging, researchers followed a group of 65 senior citizens (aged 65 or older) for five years. During that period they repeatedly tested amyloid accumulation and brain deterioration. They also decided to monitor for nonbiological factors, such as cognitive aptitude and personality tests. It appears that curiosity and non-agreeableness are two traits shared by those who are best protected from the disease.

Professor Panteleimon Giannakopoulos, who directed this study, puts it best:

“A high level of agreeableness characterizes highly adaptive personalities, who want above all to be in line with the wishes of others, to avoid conflict, and to seek cooperation. This differs from extraversion. You can be very extroverted and not very pleasant, as are narcissistic personalities, for example. The important determinant is the relationship to the other: do we adapt to others at our own expenses?” 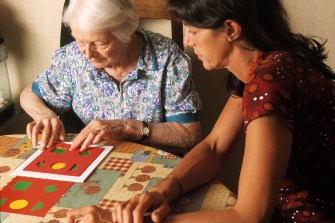 Seniors that refuse to conform with the pack seem better equipped to combat the ravages of dementia. Being open to new experiences also proves effective. This makes sense, given that groupthink often dictates stability and reliability. We already know that exercises like learning a language or musical instruments help create new neural pathways (neurogenesis) at every age. Trying out new things keeps your brain healthy.

Just as Alzheimer’s is progressive, it appears that therapeutic methods involving novelty or consistent learning helps keep brains strong even after neurological insults. The psychiatrist Norman Doidge has written about a nonagenarian nun that, after suffering a stroke that destroyed a large part of her brain, maintained perfect cognitive health by reading and doing crossword puzzles every day. During her autopsy doctors noticed a large region of her brain tissue was dead. She was able to co-opt other regions through sheer perseverance.

While Giannakopoulos and his team do not know why these qualities seem to reduce risk, they plan on continuing this research. They admit that changing one’s personality, especially at an advanced age, is extremely challenging. That said, you can change your brain at any age. We should aim to keep it as healthy as possible for as long as possible. It seems that the best way to do this is to stay curious and be kind—just not too kind.

New evidence that teeth can fill their own cavities

A drug developed to combat Alzheimer’s Disease can trigger regeneration of tooth dentin.