That neurons communicate with each other in the human brain through the transmission of electrical signals from one to another seems clear, but there are still some big questions. One of these is that we don’t know where the information in those signals actually resides. Does communication depend on the rate at which neurons fire — this is called the “rate code model” — or is it about the space between voltage spikes, AKA the “temporal code model?”

If it’s the latter, it would seem that longer or shorter intervals between spikes would have to be measured by the brain in reference to some kind of steady internal timing reference. A clock or metronome, if you will. But coming from where? No such timing reference has been found in looking at the gamma rhythms of the whole human brain. However, a pair of researchers from Brown University, Christopher Moore and Hyeyoung Shin, have just identified a localized steady neuronal pulse in rodents. One of the researchers, Moore, tells WIRED, “That, right away, suggests there’s something interesting going on here that we just haven’t seen before. Something big is lurking in there.” If this finding carries over to people, it may provide a significant clue toward answering the question of how our neurons’ encode information in the electrical signals they exchange. Moore’s and Shin’s research was published in July in Neuron. 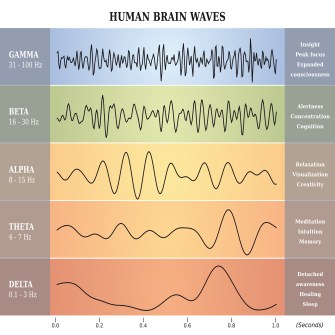 The tick-tock of gamma waves

The electrical signals generated in our brains oscillate at different speeds, or frequencies, apparently depending on what we’re doing and what mental processes those signals indicate. The fastest of these are called gamma waves, oscillating between their strongest and weakest level, or amplitudes, 38 to 42 times per second, or at a frequencies of 38-100 Hertz (Hz).

In research unsuccessfully attempting to find some kind of brain clock in humans, scientists have been measuring the aggregate of all gamma activity produced by all of the neurons in the entire brain. The new research suggests that the timing reference we’ve been looking for may be a far more localized phenomenon, with different brain areas having their own clocking neurons.

The pair’s discovery came from Shin’s examination of inhibitory neuronal responses in mice to faint touches of their whiskers. (Inhibitory neurons help keep the electrical activity of neighboring neurons under control.) The grad student was able to identify three distinct types of these neurons. One fired when she touched a whisker, and a second seemed to fire off erratically at random intervals. The third, however, was characterized by voltage spikes ticking away at a steady gamma frequency. Shin appears to have found a clock. 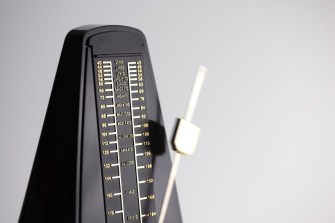 Response to the research

It’s a very big deal if it turns out that humans have similar clock-like neurons, and it’s therefore not surprising that Moore’s and Shin’s conclusions are being met with a mixed response. Some wonder why such neurons have not been found in humans already, and why there’s no trace of them in the aggregate gamma waves that have been measured.

It’s also worth noting that the gamma rhythm Shin’s neurons produced doesn’t match the whole-brain gamma wave frequency of her subjects. This could suggest a problem with the research, or simply that signals from these faint clocks don’t travel far beyond the brain regions to which they pertain. “You have to go down to the level of local groups of neurons to really see what they’re doing,” says Moore. Shin herself intends to go looking at other brain regions for similar clocking neurons.

While the new research doesn’t yet solve the larger mystery of neuron’s electrical language, if verified in humans, it would provide compelling support for the feasibility of the temporal code model.

Why, exactly, don’t you trust that person’s opinion?
Neuropsych

One tiny change might have made a huge difference.
Up Next
Smart Skills

4 ways to inject more creativity into your craft (and life)

Sometimes you have to take the road less traveled.