As the nation woke up to the news that numerous White House officials have tested positive for COVID-19, one question stands out among many: Why are some people more susceptible to the virus than others? Two new studies from the Howard Hughes Medical Institute offer potential reasons.

In February, a team led by Jean-Laurent Cassanova began enrolling COVID-19 patients. They wanted to know why some young people were susceptible to falling gravely ill while others remained asymptomatic. By March, they had enrolled 500 patients. That number swelled to over 3,000 as of last month.

The team found that roughly 3.5 percent of study patients suffer from gene mutations in antiviral defense. At least 10 percent of patients create “auto-antibodies” that attack the patient’s own immune system. The two studies, both published in the journal Science, address these two problems. As Cassanova says,

“These two papers provide the first explanation for why COVID-19 can be so severe in some people, while most others infected by the same virus are okay.”

The coronavirus is mutating. Now what?www.youtube.com

The genetic mutations slow down interferon—a group of signaling proteins released in the presence of viruses—production and function. This particular mutation makes these patients vulnerable to certain pathogens, such as the flu. Of the 659 patients initially tested in the Spring, 23 carried gene errors, rendering them unable to produce the necessary antiviral interferons to fight off COVID-19.

They then tested 987 patients, of which 101 produced auto-antibodies. All of these patients had trouble fending off the ravages of the virus. By testing people for these mutations, the team believes they can predict who will suffer most from the virus, even before they become infected.

Interestingly, 94 percent of patients that develop harmful antibodies are men, which helps explain why men are more likely to die from COVID-19. Cassanova is now investigating whether the production of these auto-antibodies is linked to X chromosomes. Even small genetic errors, the team says, could be responsible for this phenomenon. 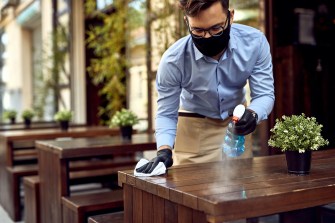 If researchers can pinpoint genetic markers in healthy patients, this could open up an entirely new testing protocol. People with this genetic mutation will know they are at higher risk for life-threatening problems, and will be able to take precautions until a vaccine is developed.

This could also affect treatment protocols. The team is looking into procedures that strip these auto-antibodies from patients’ blood, for example. They’re also investigating protective genetic factors by studying asymptomatic patients. Just as the virus exploits the above genetic mutation, others are naturally protected. They want to know why.

In regards to the vaccine, this research helps identify high-risk groups. People carrying this genetic mutation could receive the vaccine first, if these studies hold up.

With all of the above work happening at the center, it’s no wonder Cassanova concludes, “Our lab is currently running at full speed.”

Elephants mourn the dead, dolphins give names to each other, and insects can recognize faces. The animal world is much smarter than we think.
Hard Science

David Julius and Ardem Patapoutian were awarded the highest honor in medicine for their research into how human bodies make sense of and respond to the outside world.
Surprising Science

A new study looks at what happens when you get infected with two viruses at the same time.
Surprising Science

Pins and needles, anyone?
Up Next
The Present

A new interactive documentary “How Normal Am I?” helps reveal the shortcomings of facial recognition technology.