A man in Hong Kong was infected with SARS-CoV-2 for a second time, becoming the first confirmed case of reinfection, according to researchers at the University of Hong Kong.

The patient is a 33-year-old man who first contracted the virus in March, and then again more than four months later while traveling in Europe. Since the coronavirus was first reported, scientists have been trying to figure out whether it’s possible to contract the virus multiple times, as is possible with other coronaviruses.

But despite some anecdotal reports of reinfection, the Hong Kong patient is the first confirmed case. To make sure the second infection was unrelated to the first, the researchers sequenced the virus from both infections and compared the RNA. They found a significant difference between the samples.

“This is the world’s first documentation of a patient who recovered from Covid-19 but got another episode of Covid-19 afterwards,” the researchers said in a statement.

On one level, it may be discouraging to learn that it’s possible to contract SARS-CoV-2 twice. But the researchers noted that the Hong Kong case might be an outlier, and that reinfection could be rare throughout the population. What’s more, the paper described the patient’s first case as mild and his second case as asymptomatic.

1) Second infection was asymptomatic. While immunity was not enough to block reinfection, it protected the person from disease. (2/n) pic.twitter.com/C65F8ff5UN

Still, the processes behind the immune response to the virus remain unclear. Earlier in August, the Centers for Disease Control and Prevention issued new guidelines saying that immunity from COVID-19 likely only lasts three months after contraction, while studies have suggested that antibodies seem to fade away after a few months.

But antibodies aren’t the whole story. The immune system also has T cells and B cells — the so-called “memory” cells that are able to remember a virus, and then strategically mobilize the immune system against it if it enters the body again. That may help to explain why the Hong Kong patient’s second infection was asymptomatic. 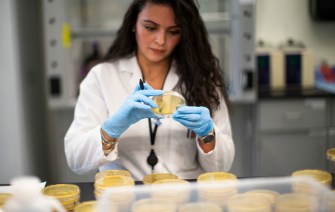 It’ll take time to know how common reinfection is, how durable the immune response is, and how the inevitable mutation of the virus impacts efforts to develop a vaccine.

“It may be completely different with this coronavirus,” Dr. Anthony Fauci, who heads the National Institute of Allergy and Infectious Diseases, said in an interview with the medical journal JAMA. “It may be that people induce a response that’s quite durable. But if it acts like common coronaviruses, it likely is not going to be a very long duration of immunity.”

The Universe is dark, but the distorted light reveals its presence.When we look at the objects in the Universe, the mass just doesn’t add up.A galaxy that was governed by […]