Quantifying workouts has resulted in an increasingly suspect trend in the fitness industry. The gamification of exercise is one thing — if hitting 10,000 daily steps helps you move more, the technology is worthwhile. Calorie counters on a variety of cardiovascular machines tell another story. The notion that exertion can be accurately tracked in anatomically and physiologically divergent participants is ludicrous.

It’s a running joke in cycling studios that the calorie output is nowhere near accurate. (The same is true for wattage, which can vary tremendously among stationary bicycles.) Calibration isn’t the culprit; it’s our expectation that fitness can be reduced to a set of numbers. In a world that attempts to quantify every last measure, too many variables are not considered.

Take obesity. Body-mass index is an unfair measure of body structure. My 185 pounds, at six-three, is held much differently from guys that are five-nine, but also guys that are six-three. Body mass divided by the square of body height might yield similar results on a calculator, but reality is not confined to machine output.

The same is true of one of the most common fitness measures we use, so much so that to debate its importance seems heretical: the calorie.

For generations, the calorie — calor, Latin for “heat” — has been the primary focus of weight loss. “Calories in, calories out,” a mantra so often repeated that questioning its validity only proves your ignorance of the basic building block of nutrition.

Sometimes, an assumption is a terrible waste of energy.

Energy lies at the origins of calories, as Peter Wilson writes in his extensive critique of our obsession. Originally devised to measure the efficacy of steam engines, in the 1860s German scientists began applying these units to food. Wilbur Atwater, an agricultural chemist born in New York in 1844, compared food working in the body as the fuel behind fire after visiting Germany. (The comparison of the human digestive system to a furnace is sometimes attributed to French cooking, though the metaphor was widely used in Ayurveda.) Atwater also introduced the concept of macronutrients to the public.

For decades Atwater was the don of nutrition and metabolism and should be credited for his incredible foresight. Atwater’s extensive research into measuring caloric input and output exemplified the advanced science of his day. The problem is we are not living in the 19th century. As Wilson writes of Atwater’s advice,

“He counseled the poor against eating too many leafy green vegetables because they weren’t sufficiently dense in energy. By his account, it made no difference whether calories came from chocolate or spinach: if the body absorbed more energy than it used, then it would store the excess as body fat, causing you to put on weight.”

Today hardly anyone would argue that chocolate and spinach produce similar results, but even that line of reasoning is flawed: What is the cacao-to-sugar ratio? There is a world of difference between 70 percent and 100 percent, a point that Wilson touches upon in his assessment of what is likely the actual heart of the problem: carbohydrates, especially in processed foodstuff form.

“All carbohydrates break down into sugars, which are the body’s main fuel source. But the speed at which your body gets its fuel from food can be as important as the amount of fuel. Simple carbohydrates are swiftly absorbed into the bloodstream, providing a fast shot of energy: the body absorbs the sugar from a can of fizzy drink at a rate of 30 calories a minute, compared with two calories a minute from complex carbohydrates such as potatoes or rice. That matters, because a sudden hit of sugar prompts the rapid release of insulin, a hormone that carries the sugar out of the bloodstream and into the body’s cells.” 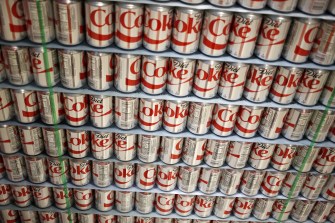 The soda industry has long profited from the calorie myth by offering low-calorie versions that are in no way healthy. Photographer credit: Luke Sharrett/Bloomberg via Getty Images

This is why “juice cleanses” are ridiculous. Stripped of fiber, you might as well be drinking a vat of sugar water; the slow absorption of fruit sugar is thanks to the pulp. Because the macronutrient fat is associated with the physical condition of being fat, a public health scare led to all sorts of franken-creations in the ’80s. The “calorie is a calorie” mentality reigned supreme. Ironically — though, not really — this is when the obesity epidemic kicked off. Between 1975 and 2016, Wilson writes, global obesity rates tripled.

As mentioned, BMI is a relatively useless measure, but to claim that a flawed measurement system must produce inaccurate data would be equally false. We are overweight. Besides, skyrocketing rates of cardiovascular diseases and type 2 diabetes — diseases of affluence, as they’re called — reveal the depth of our nutrition problem. Sure, overeating is a problem that can cause weight gain, but what you’re eating is equally if not more relevant.

The most troubling aspect of Wilson’s research might just be the revelation that packaging labels are off by a range of 8 to 20 percent; in some processed frozen foods, as high as 70 percent. Food calories are based on the heat the food gives off in an oven, not a human being. As Wilson writes, “the real-life journey from dinner plate to toilet bowl takes on average about a day, but can range from eight to 80 hours depending on the person.”

That’s not the only factor governing how each of us stores fat. The composition of our microbiome plays a significant role in nutritional health; how much sleep we get and at what time of day we eat factor in; even the length of your intestines matter. “Calories in, calories out” isn’t a pithy truism; it’s a lazy assessment by those unwilling to understand the complexity of the modern food industry and the corporate forces that sold us a lie.

For 15 years I’ve worked in the fitness industry, over which time I’ve seen tens of thousands of bodies in my classes. Humans come in many shapes and sizes. Some people can truly eat whatever they desire and not gain a pound; others chew on leaves and remain portly. The lengths we go to calorie count isn’t a sign of health; it’s orthorexia, which creates cortisol, another factor in weight gain.

Don’t be fooled by the arrogance of simplicity. Body weight is a multivariate phenomenon. Pretending a one-size-fits-all solution exists only serves one end: ensuring discount diet book shelves remain stocked. This year’s trend is always next year’s “how did we buy into that?”

The lives behind a few key inventors.