Health regulators in Europe have issued the world’s first approval for a vaccine against Ebola, and it’s estimated to become widely available in 2020.

Since August 2018, Ebola has killed more than 2,000 people in the Democratic Republic of Congo (DRC). Besides the 2014 West African outbreak that killed more than 11,000 people, the 2018 DRC outbreak is so far the deadliest on record. And the number of cases continues to rise. But experimental vaccination programs have helped curb infection rates. In these programs, Ervebo was strikingly effective, showing an estimated protective efficacy of 97.5 percent, as the World Health Organization reported in April. 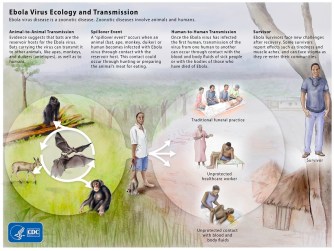 Centers for Disease Control and Prevention

“Finding a vaccine as soon as possible against this terrible virus has been a priority for the international community ever since Ebola hit West Africa five years ago,” Vytenis Andriukaitis, commissioner in charge of Health and Food Safety at the EU’s European Commission, said in a statement. “Today’s decision is therefore a major step forward in saving lives in Africa and beyond.”

Ervebo protects against a particularly infectious ebolavirus species called Zaire, one of four species known to infect humans. Zaire can also infect animals, like macaques. In 2005, researchers at the Public Health Agency of Canada’s National Microbiology Laboratory developed an Ebola vaccine that protected macaques 100 percent of the time. But lack of funding and regulatory hurdles meant it’d take years, maybe decades, to prove the vaccine was safe and effective in humans.

Congo’s Ebola crisis threatens to spiral out of control

Then the 2014 West African outbreak struck. With the need for an effective vaccine made clear, Merck obtained the license to Ervebo, known as rVSV-ZEBOV-GP, and soon the vaccine was being administered to people in Guinea as part of a clinical trial. The vaccination strategy there was to inoculate people who’d been in contact with others who’d been infected with Ebola. This is called ring vaccination.

But while ring vaccination was effective in preventing the spread of Zaire, it remains unclear just how long the protective effects last. That’s a critical question for, say, health workers who get vaccinated to protect themselves against infection that might occur months later. There are also other ebolavirus species that other vaccines would need to address, such as the deadly Sudan species.

WHO prequalifies #Ebola vaccine, paving the way for its use in high-risk countries. #VaccinesWorkpic.twitter.com/FI8BZDtvCS

In addition to the conditional marketing authorization issued by the European Medicines Agency, the World Health Organization has “prequalified” the Ervebo, meaning it meets standards for safety and efficacy.

“[Prequalification] is a historic step towards ensuring the people who most need it are able to access this life-saving vaccine,” WHO Director-General Dr. Tedros Adhanom Ghebreyesus said in the announcement. “Five years ago, we had no vaccine and no therapeutics for Ebola. With a prequalified vaccine and experimental therapeutics, Ebola is now preventable and treatable.”

In the U.S., the Food and Drug Administration is expected to decide on approval in March 2020.

A new study looks at what happens when you get infected with two viruses at the same time.
Strange Maps

Free speech? Not everybody loves it, this map shows

In some countries, people want more freedom of speech. In others, they feel that there is too much.
Strange Maps

Finally, a scientific cure for the hiccups

A new device cured the hiccups 92 percent of the time in a recent study involving more than 200 participants.
Health

Mixing human + animal DNA and the future of gene editing

“The question is which are okay, which are not okay.”
▸
14 min
—
with
Big Think
Up Next
Life

Who is a non-human person?

An orangutan has settled into a Florida home after a court granted her personhood rights. But what is the basis for personhood?