Would you improve humanity if you could? Many of us have opinions about how we can boost up society and government. But what about just re-engineering the people themselves, to make them more advanced physically and intellectually? Would better bodies lead to better people? One person who can turn such musings into reality is George Church, the Harvard genetics professor famous for trying to resurrect woolly mammoths, among many other accomplishments. Church also made a list of genes that could be targeted through genetic manipulation for the purpose of designing a new version of humans.

In an interview with Futurism, the professor explained that one purpose of assembling such a list is in giving correct information to the people. It has been his long-term mission to drive down the costs of genetics resources. To that end, the list includes both protective and negative consequences of hacking a particular gene.

“I felt that both ends of the phenotype spectrum should be useful,” Church elaborated. “And the protective end might yield more powerful medicines useful for more people and hence less expensive.”

Here are some selections from the so-called Transhumanist Wishlist, drawing upon the philosophical movement of transhumanism that calls for using technology to enhance human physiology and intellect, leading to a transformation of what it means to be human: 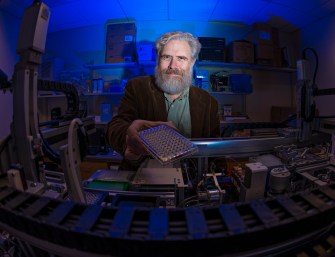 George Church, a professor of Genetics at Harvard University, with the MAGE Device Multiplex automated Genome Engineering on November 30, 2012.Photo by Rick Friedman/rickfriedman.com/Corbis via Getty Images

“I’ve made the argument that we’re already transhumanist, that is to say, if it’s defined as being almost unrecognizable to our ancestors,” said Church in a radio interview. “I think if you brought some of our ancestors or even people from un-industrialized tribes they would not understand what we’re doing.”

You can check out the full transhumanist “wish list” here, along with additional resources that include studies of specific genes and their effects. While some of these hacks are already being attempted, more discussion and development is necessary. Church sees that future doctors would be able to receive transplants with hacked genetic modifications.

How long till that future? Scientists around the world are racing to make genetic advancements, generally before their governments catch up. Gene-edited human babies are already being born. Chinese scientists were able to edit the gene CCR5 to make two baby girls more resistant to HIV. On the flip side, they made the girls more susceptible to the West Nile Virus. Finding the right balance will be crucial if we’re to become superhuman.

George Church: A Peek at the Future of Synthetic Biology and Radical Wellnesswww.youtube.com

Pins and needles, anyone?
Videos

Reality is more distorted than we think.
▸
with
Big Think
Life

These animals to grow scalpel-sharp and precisely shaped tools that are resistant to breaking.
Up Next
The Present

The most admired woman on planet Earth? Michelle Obama.

The new YouGov survey also indicates that Barack and Michelle Obama are the most admired couple in the world.