There are actual risk factors, however. Heavy usage of bodybuilding steroids can cause gonadal impairment. Exposure to the fertilizer, DBCP, makes men infertile. Banned in the US in 1979, the nematicide caused widespread problems in plantation workers in a number of countries. Those men successfully sued the American manufacturers that refused to remove the fertilizer from circulation.

Yet something even more troubling is going on. A 2017 meta-analysis discovered that worldwide, the average sperm count dropped from 99 million sperm per milliliter in 1973 to 47 million in 2011. The likely culprit: plastics. As if we needed yet another reason to discuss the scourge of microplastics. The entire situation is another reminder that progress—in this regard, plastics everywhere around us—has consequences.

This doesn’t make us impotent—to this problem, at least. Just as there are reasons for this excessive drop in sperm count, there are means for raising them back up (well, at least their swimming abilities). A new study in the journal, Human Reproduction, focused on one of the most important: exercise.

Previously, studies were inconclusive connecting exercise and sperm health. The China-based researchers (some with ties to the Harvard T.H. Chan School of Public Health and Indiana University Bloomington in the States) write that many of those studies recruited less than 100 men. For this study, 746 healthy young men joined in for a six-month investigation. Thousands of sperm samples were analyzed.

To impregnate a woman, three important factors were considered: sperm concentration, sperm morphology, and motility. To increase chances of procreation, there needs to be a lot of swimmers, successful sperm have to have the right shape and size, and they have to know how to swim. (As explained in the Netflix show, strength and speed are not necessarily relevant factors, but they need to know how to navigate the terrain.)

Though duration and type of exercise were not determined, one thing is clear: men who exercised more exhibit better sperm. Those who exercised the most had the best sperm motility, while those who exercised least showed the worst results. Count and morphology were not affected by exercise. 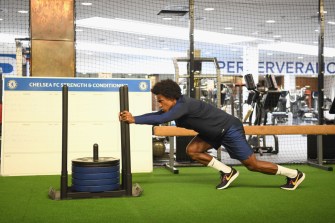 Willian of Chelsea in action during a gym training session at Chelsea Training Ground on October 15, 2019 in Cobham, England.

Previous research suggests that excessive exercise can have the opposite effect, however: too much working out can be bad for reproductive fitness. For both men and women, stress levels also affect reproductive capabilities. Ironically, being tired from a sedentary lifestyle produces similar outcomes as exercising to exhaustion.

That said, the consequences of not exercising are far more dangerous. Obesity, diabetes, heart disease, inflammation, and even sex drive are all affected when you’re not regularly moving your body. The researchers recommend moderate exercise to achieve optimal results.

They also note that global trends in obesity make research like this important. Reproductive fitness is an essential quality in every species. There might be more than enough humans at the moment—from an evolutionary perspective, we’ve done quite well—but no future is guaranteed. Survival comes down to strong sperm and healthy eggs.

Women, as mentioned, have taken the brunt of the blame for far too long. The science is clear: men are half the problem. Time for us to step up our game and own the consequences.

If you were to compress the entire history of the Universe into one calendar year, everything we love happens on December 31st.Our Universe has been around for 13.8 billion years since […]