A new study shows that cannabis use is associated with abnormalities in a brain region responsible for processing emotions seen on people’s faces. The results suggest that smoking cannabis during adolescence and young adulthood could damage this brain region, making it harder for users to recognize subtle emotional changes in others, which could potentially contribute to mood disorders.

“There is a high rate of overlap between regular (at least weekly) cannabis use and mood disorders such as depression and anxiety,” study author Kristin E. Maple, a doctoral candidate at the University of Wisconsin-Milwaukee, toldPsyPost. “People with depression and anxiety often have differences in brain structure in regions that process facial emotions. The current study was designed to investigate whether cannabis users (without mood or other psychiatric disorders) have similar differences in brain structure, and whether those abnormalities are related to problems processing facial emotions.”

In the study, Maple and her colleagues used MRI scans to examine the brains of 20 regular cannabis users (who used cannabis at least 40 times in the past year) and 35 non-users. Participants also completed several tasks related to facial emotion processing, which involved looking at various images of faces on a computer screen. These tasks tested participants’ ability to discriminate between and recognize emotions and also to judge the degree to which emotions are expressed. 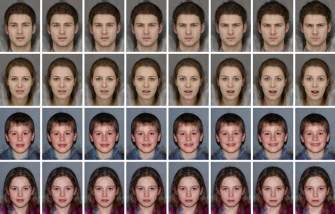 Example of a facial emotion recognition task, not part of the current study.

Journal of Autism and Developmental Disorders

The results showed that both male and female cannabis users’ brains had significantly lower volumes in the left rostral anterior cingulate cortex (rACC) and also that users performed relatively poorly on one of the facial-emotions tasks: emotional discrimination.

In this task, participants were shown two identical images of a person’s face. But sometimes, one of the images had a subtle computer-generated tweak that was inserted to intensify the display of either happiness or sadness. Participants had to look at each set and judge whether one of the images more intensely expressed the given emotion, or whether they were equal.

“These rACC structural abnormalities are related to difficulty noticing subtle differences in facial emotions, even after three weeks of abstinence from cannabis. This emotion processing deficit could be one reason why many people who regularly use cannabis also have mood disorders (e.g., depression or anxiety).”

Still, the study didn’t establish causality. “The study was cross-sectional, which means we don’t know whether abnormalities in the rACC make someone more likely to use cannabis, or whether regular cannabis use leads to abnormal rACC structure,” Maple said.

The researchers wrote that longitudinal work is needed to fully understand “the causal relationships between substance use, comorbid disorders, gender, brain structure, and affective processing.”

How much bravery can and should we expect from police officers?