Fortunately, marijuana’s reputation has come quite a ways since then. Its medicinal properties are widely recognized, 10 states (as of this writing) have legalized it, and its status as a comparatively healthy alternative to alcohol and tobacco is clear. Now, new research from Harvard is giving marijuana a further bump in its reputation.

Prior research has found that marijuana usage can have a troubling side effect for men—according to a handful of studies, it reduces men’s sperm counts and quality. This obviously undesirable effect, though, may not actually be the case. In fact, the opposite might be true.

Researcher Feiby Nassan recently contributed a study to Human Reproduction — it was published on February 6 — focusing on the testicular function of men who used marijuana. Between 2000 and 2017, Nassan and her colleagues collected 1,143 semen samples from 662 men at the Massachusetts General Hospital Fertility Clinic as well as questionnaires on their history with marijuana. Contrary to their original hypothesis, Nassan found that men who had smoked just two joints in their lifetime had “significantly higher” sperm concentrations. What’s more, frequent users of marijuana had higher levels of serum testosterone as well. 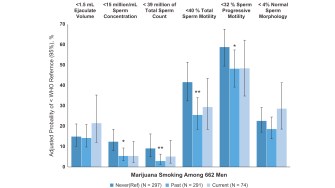 Nassan and colleagues compared men who had never smoked, had smoked in the past, or were current smokers according to where they fell based on recommended fertility markers set out by the WHO. In the graph above, we can see that marijuana smokers — often regardless of whether they were past or current smokers — were more likely than non-smokers to meet these minimum healthy criteria. For example, non-smokers were more likely to have less than 15 million sperm per milliliter, more likely to have less than 39 million total sperm, and more likely to have fewer mobile sperm (i.e., sperm motility). They also had fewer progressively motile sperm, meaning their sperm failed to move in a straight line, swimming in circles instead, as well as more sperm with abnormal morphologies.

That being said, current smokers were more likely to have less ejaculate volume and more sperm with abnormal morphologies. Overall, the results suggest that moderate use of marijuana may be the best bet.

While the results seem clear, it’s important to take this research with a grain of salt. Firstly, this was a correlation study: there was no way to say whether smoking marijuana caused these differences, just that they were associated. Furthermore, there’s a few different ways to interpret the results. Nassan explains that there are two different possible interpretations: “The first [is that] that low levels of marijuana use could benefit sperm production because of its effect on the endocannabinoid system, which is known to play a role in fertility.” Endocannabinoids are a broad group of neurotransmitters that bind to cannabinoid receptors throughout the brain and peripheral nervous system. They handle a few different jobs in the body, including regulating appetite, mood, motivation, and—of course—fertility. Tetrahydrocannabinol, or THC, is the main psychoactive ingredient in marijuana, and it binds to these receptors, producing the high associated with the drug and potentially improving aspects of fertility.

“But,” says Nassan, “those benefits are lost with higher levels of marijuana consumption.” Nassan’s own results showed some downsides to current marijuana use, and, as mentioned previously, prior research has shown that fertility can be reduced in heavy smokers.

The second interpretation, says Nassan, “is that our findings could reflect the fact that men with higher testosterone levels are more likely to engage in risk-seeking behaviors, including smoking marijuana.” Testosterone has an array of behavioral and physiological effects in men. It’s associated with both reproductive health, as well as behaviors like aggression and risk-taking. It could be that high-testosterone men seek out marijuana and other drugs, skewing the results of the study.

Ultimately, the true conclusions we can draw from Nassan’s study is that we simply don’t know enough about marijuana. Its pariah status has clouded the general public’s understanding of its true nature. Now that its gaining broader acceptance, it’s more important than ever to research marijuana and study its effects on the human body.

The spike in measles cases stems from three outbreaks in Washington and New York.