For as long as anyone remembers, parents have rocked their babies to sleep. The simple, regular rhythm soothes and relaxes a wee one, and research has shown that the same thing can even help adults sleep and to consolidate memories. The way in which rhythm works on us is a curious thing. For musicians, of course, being able to lock onto, perform along with, and recreate a rhythm is a basic, mandatory skill. But how exactly does this work?

This is the question a team of researchers — themselves musicians — from McGill University in Toronto sought to answer in their new study, “Rhythm Complexity Modulates Behavioral and Neural Dynamics During Auditory–Motor Synchronization,” published in the October 2020 issue of the Journal of Cognitive Neuroscience.

The study was led by Caroline Palmer, who explains, “The authors, as performing musicians, are familiar with musical situations in which one performer is not correctly aligned in time with fellow performers — so we were interested in exploring how musicians’ brains respond to rhythms.”

There are at least three aspects to working with a rhythm: hearing it, comprehending it, and physically performing. The researchers were curious about what separates a solid player from one whose rhythmic sense was iffy. “It could be that some people are better musicians because they listen differently or it could be that they move their bodies differently.”

It turned out neither was the case. 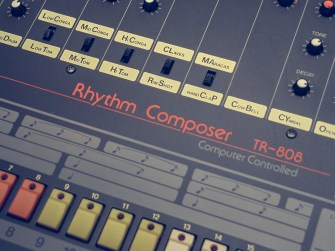 A beat machine that produces notes similar to those used by the researchersCredit: Steve Harvey/Unsplash

Palmer and her colleagues worked with 29 adult musicians — 21 female and 6 males, aged 18 to 30 years old — each of whom was proficient with an instrument, having studied for a minimum of six years. With electroencephalogram (EEG) electrodes affixed to their scalps, the participants listened to and tapped along with different versions of three basic rhythms as the scientists captured their brain activity.

Each rhythm was preceded by a four-beat count off.

(Tap or click each rhythm’s name above to listen to its complete version with no beats or sounds omitted.)

The participants were assigned Listen, Synchronize, and Motor tasks. In the: 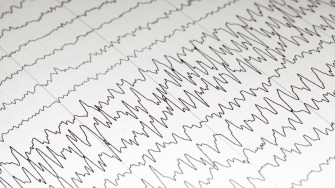 The scientists were able to identify neural markers representing each musician’s beat perception, revealing the degree of synchronicity between the researchers’ rhythms and the brain’s own rhythms. Surprisingly, this synchronicity turned out to be unrelated to brain activity associated with either listening or playing.

Said the study’s first authors, PhD students Brian Mathias and Anna Zamm, “We were surprised that even highly trained musicians sometimes showed reduced ability to synchronize with complex rhythms, and that this was reflected in their EEGs.”

While the musician participants were all reasonably competent at tapping along to the rhythms, the degree to which the markers aligned to the beats was what separated the good players from the best. “Most musicians are good synchronizers,” say Mathias and Zamm. “Nonetheless, this signal was sensitive enough to distinguish the ‘good’ from the ‘better’ or ‘super-synchronizers,’ as we sometimes call them.”

When Palmer is asked whether a person can develop the ability to become a super-synchronizer, she answers: “The range of musicians we sampled suggests that the answer would be ‘yes.’ And the fact that only 2-3% of the population are ‘beat deaf’ is also encouraging. Practice definitely improves your ability and improves the alignment of the brain rhythms with the musical rhythms. But whether everyone is going to be as good as a drummer is not clear.”

The Industrial Revolution changed music forever, thanks to a combination of technological advances and clever entrepreneurs.
Neuropsych

One tiny change might have made a huge difference.
Up Next
Hard Science

Astronomers propose a new location for the mysterious force that accelerates the universe.