In July, while visiting my family in New Jersey, we chose an expectable boardwalk restaurant to eat at while down the shore. As it’s been decades since I’ve lived in the area, I was shocked by portion sizes. You would have thought it was a family-style dining establishment, with each plate designed to feed four. Alas, the amount of food that wasn’t eaten saddened me. More is not always better; it’s often wasteful.

Americans dominate the world in food waste. Somewhere between 30-40 percent of all food in our supply is thrown away — roughly $160 billion into the dumps each year. Not that the rest of the planet is much better. The global figure is close to a trillion dollars, with 1.3 billion tons of food being tossed.

While this is an unsustainable figure, a new research article in Frontiers in Nutrition presents an even more disturbing assessment: food waste is dwarfed by the obesity epidemic.

Forget 1.3 billion tons; lead researcher, Professor Mauro Serafini at Italy’s University of Teramo, claims that overeating results in an extra 140 billion tons of food consumption every year. According to Serafini’s “metabolic food waste” (MFW) hypothesis, the environmental cost of that food is equivalent to 240 billion tons of CO2 released into the atmosphere. 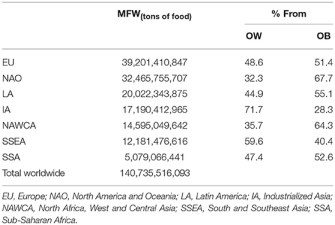 Specifically, MFW is the amount of food being produced that leads to extra body weight and the impact those calories have on the environment in terms of carbon, water, and land footprints. By his measure, Europe (EU) is the leading culprit, followed by North America (NAO; this region includes Oceania). The other regions are listed in the chart above.

“We provide evidence of the enormous amount of food lost through obesity and its ecological impact. Reducing metabolic food waste associated with obesity will contribute in reducing the ecological impact of unbalanced dietary patterns through an improvement of human health.”

As I reported last week, obesity in America costs the national healthcare system $1.72 trillion. Two billion obese adults now walk around the planet, along with 41 million children under age five. If you’re beginning life overweight, there are many obstacles ahead, many of which might prove insurmountable.

The team notes that this is in part due to the “push effect” — increased food availability and marketing. Marketing is never honest as to the chemistry involved in producing their foodstuffs. For example, while writing this article, my social media feed is being bombarded with articles on KFC’s new sandwich: fried chicken wedged between two glazed donuts. Every new iteration of old products seems to be unhealthier than the last.

How The U.S. Is Exporting Obesity | AJ+

How The U.S. Is Exporting Obesity | AJ+

The largest contributors to MFW in the EU and NAO turn out to be dairy products (including milk and eggs), followed by alcohol and cereals in the EU and meat and alcohol in the NAO. Remember, this not only pertains to consumption, but also agricultural, production, and transportation costs. Though the methodology is debatable — even Serafini recommends further research, as does the publication — the ecological costs of obesity turn out to be very high.

The team does not offer specific fixes to the problem beyond public health campaigns that teach consumers the dangers of obesity. People already know this, however. In fact, after my article on obesity last week, a number of readers reached out to inform me that other people’s weight is “none of my business.”

The problem is, it is. If Serafini’s hypothesis is correct — and it’s undeniable that obesity is resource-intensive — then this is everyone’s problem. We’re all paying for the soaring costs of healthcare. Water, carbon, and land costs of overeating are astronomical, serving as yet another driver of climate change. You can’t claim that the planet isn’t anyone else’s business. We’re all invested in its health. Right now, we’re collectively failing to ensure the survival of our species.

Perhaps this is what happens whenever you give an animal too many options. Alpha predators are known to destroy ecosystems when their power is left unchecked. Throughout history, our power was kept in balance. For eons, our forebears had to scrape together enough food to live. Yet in the time of excess that we now live in, we indulge. The costs are known. Whether or not we have the courage to do anything about them is another story.

Quantum Physics Is Fine, Human Bias About Reality Is The Real Problem

Forget Copenhagen, Many-Worlds, Pilot Waves and all the others. What you’re left with is reality.When it comes to understanding the Universe, scientists have traditionally taken two approaches in tandem with one […]