Opioid deaths in the U.S. are soaring amid the COVID-19 pandemic. Health experts say the overdose crisis is worsening as states with dwindling revenues cut funding for treatment programs.

At least 35 states have reported increases in fatal opioid overdoses this year, according to a recent report from STAT. Nationally, relapse rates and use of new synthetic opioids are on the rise, while drug overdose deaths have risen by an average of 13 percent, according to data obtained by The New York Times. In Chicago, officials have already logged 773 opioid deaths between January 1 and July 13. That’s up from 605 during the same period last year.

Alarmingly, the opioid crisis was already worsening before the COVID-19 pandemic. In 2019, the U.S. logged nearly 71,000 drug overdose deaths, more than half of which were attributed to opioids, according to preliminary data released Wednesday by the US Centers for Disease Control and Prevention’s National Center for Health Statistics. That’s about a 5 percent increase from 2018.

Facing falling revenues due to economic turmoil caused by the pandemic, some states are cutting funding for treatment programs and other addiction-related services. STAT reports, for example, that Georgia, New Jersey, Florida and Utah have already cut millions in funding for future drug treatment programs.

Meanwhile, nearly half of syringe service programs in the U.S. have reported closures or other service disruptions since the pandemic began, according to a survey from the North American Syringe Exchange Network.

“Policymakers are faced with impossible choices,” Jodi Manz, project director for chronic and vulnerable populations at the National Academy for State Health Policy, told STAT. “Leaders are being put in situations where they thought they had really significant revenue from the prior year, and just overnight were faced with a very, very different revenue situation.”

The side effects of the pandemic may be worsening the problem, too. For example, stay-at-home orders may put Americans at higher risk of using or relapsing drugs, especially when you consider widespread job losses.

“Social isolation has always been a huge component of drug overdose risk,” Traci Green, an epidemiologist at Brown University who studies drug addiction, told The New York Times. “So much of what we’ve been trying to do has been completely unraveled.”

But perhaps more concerning amid the pandemic is drug users’ reluctance to visit hospitals. In Illinois, for example, emergency rooms across Cook County Health have reported a surge in opioid deaths, but no corresponding surge in emergency-room visits for opioids. 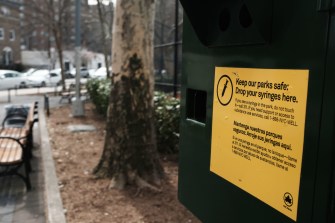 A deposit box for used hypodermic needles stands in a park in the South Bronx on March 13, 2019 in New York City. Photo by Spencer Platt/Getty Images)

“This is extremely alarming because an opioid overdose patient will likely live if given naloxone in the ambulance and opioid overdose deaths in the emergency department are a rare event,” Dr. Steve Aks, division chair of emergency medicine and toxicology at Cook County Health, told ABC 7 Chicago.

Another reason the pandemic may be exacerbating the opioid crisis is that it’s disrupting regular habits and drug supply. For example, cash-strapped users may be taking unusually long breaks between taking opioids, which would lower their tolerance. This would also increase their risk for overdose.

Still, it’s still too early to determine exactly how the pandemic is affecting the opioid crisis in the United States.

“Nobody has hard data yet; they just don’t,” Patrick Trainor, a spokesman for the Drug Enforcement Administration in Philadelphia, told The New York Times.

What the addiction treatment community does know, however, are some basic steps that help to save lives, as journalist Maia Szalavitz told Big Think in 2019:

“I think in order to help deal with opioid addiction, for one we need to have naloxone in every first aid kit. There is absolutely no reason why people who are surrounded by other people should ever die of an overdose. If you are injecting and other people are there—which is the case 50 to 60 percent of the time—naloxone should be there.

“And this is not going to encourage more drug use, because it’s an awful experience to get awakened with naloxone, but it will save lives. And so that’s one way we can turn the tide on this.

“The other way that I think we can turn the tide on opioid addiction is we really need to provide greater access to drugs like methadone and Suboxone, which is also called buprenorphine.”

There are two kinds of suffering. One is pure pain. The other makes life worth living.
▸
6 min
—
with
Paul Bloom
Up Next
Health

Working memory is the workhorse of cognition. Having less of it has side effects.