Scientists in China have successfully grown and reconstructed new ears for five children born with microtia, a condition that affects the function and appearance of the ear. The recent study marks a new milestone in the field of tissue engineering.

A paper published in the journal EBioMedicine outlines how the team performed the procedure.

The researchers used cartilage cells collected from patients’ affected ears to grow new cartilage in vitro. They 3D-printed mirrored copies of each patient’s healthy ear to use as scaffolding into which the new cartilage could grow, ensuring that the new ears would be the right shape for each individual. Finally, the scientists attached and reconstructed the new ears onto the patients. 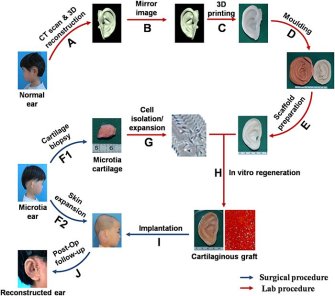 “We were able to successfully design, fabricate, and regenerate patient-specific external ears,” wrote the researchers.

Reconstructing the ears of microtia patients has been a goal of the tissue engineering community for decades. The condition affects as many as 17.4 out every 10,000 children in some countries, in degrees ranging from a slightly smaller ear (on one side or both) to a completely missing ear, a condition known as anotia. It cripples hearing ability; one doctor wrote that hearing with microtia is similar to placing a finger in your ear, and can also damage self-confidence.

The study signals new hope for children afflicted with microtia, but the procedure may prove difficult to implement on a large scale.

“The method for making these constructs is quite complicated, involving three distinct biomaterials that are combined into a scaffold, seeded with cells, then cultured for three months before implantation to ensure proper cell distribution throughout the construct.”

Scaling up the procedure for thousands of microtia patients would be a difficult task, he said.

“Secondly, the materials that are used for these scaffolds remain in the body for a long time: up to four years… Such implants would likely need to be monitored for four or five years before the ultimate fate of these materials in the body is known.”

Still, the results of the recent study are positive.

“Tissue engineered auricle is a promising alternative to current ear reconstructive options, but its clinical translation is yet to be accomplished,” the researchers wrote. “In the current study, cartilage frameworks with patient-specific ear shapes and proper mechanical strength were successfully engineered in vitro. Using these engineered ear frameworks, we performed external ear reconstruction on 5 patients and achieved satisfactory therapeutic outcome as revealed during 2.5 years’ follow-up so far.”

Today, a quickly emerging set of technologies known as bioprinting is poised to push the boundaries further.
Health

Treatable brain inflammation may be behind tinnitus

Scientists may have seen a way to cure a maddening symptom of hearing loss.
Health

It takes an average of 7.5 months to build a single-family home. A Ukrainian startup has cut that timeframe down to just 8 hours.
The Present

Rather than one layer at a time, this method creates an entire object all at once, using lasers.
Up Next
Technology & Innovation